Two brothers at Harvard have launched The World Blog (theworldblog.org), a website that follows over 50 of their classmates as they travel around the world to help communities in need. 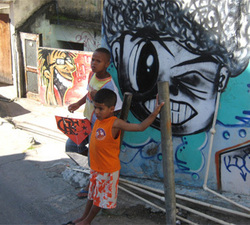 A new non-profit website started by two Harvard students aims to increase awareness about important issues all over the globe. The World Blog follows over 50 Harvard students as they travel around the world to help communities in need. Some are working to educate developing-world entrepreneurs, others are helping reintegrate former child soldiers into their communities, and yet others are discovering what life is like in the slums - a reality for over one billion people.

The site was created by senior Omar Musa and sophomore Tariq Musa, brothers at Harvard College. The two grew up in Salt Lake City, Utah and have worked together to build websites since a young age, having created Soccer Fans Network in 1998. Now, their hope with The World Blog is to allow the writers to share their experiences and raise awareness about their work. "Anything you hear about the Middle East is about war and terrorism, anything about Africa is about AIDS, and anything about China is about the country's surging economy," says Omar. "The reality is, there is a lot more going on in all these places and we're lucky to have writers blogging about it."

One writer, junior Leah Zamore, ventured to Uganda to work with an NGO that counsels former child soldiers. Many of these children had been abducted and forced into service by rebel groups, but the organization believes they can be reintegrated into society through education. While in Uganda, Leah contracted malaria and describes the experience in her blog. "The night I became sick was the longest and loneliest night of my life," she writes. "I spent the first ten hours lying on my back unable to move or to speak. Every time I opened my eyes I saw nothing but the walls spinning and swirling around me."

Another writer, senior Liz Goodwin, is spending her summer in La Paz, Bolivia, where she is helping street children create a local newspaper. Many of these children were once abandoned but are now part of a community.

In Palo Alto, California, sophomore Liz Altmaier is working with Project Baobab, a non-profit organization that provides free education and entrepreneurial grants to women in Kenya. By giving these women an opportunity to start various businesses, Project Baobab hopes to mitigate the cycle of poverty in Africa.

The World Blog was launched in late June 2007 and was funded in part by a grant from the Harvard Alumni Association of Utah, a donation awarded each year to a project benefiting the community.