Even in 2010, Many top music celebrities have not found their place performing in China. But, with her 8th return, Heather sets her feet down firmly in mainland China. Hangzhou, one of China’s most popular tourist destinations, is a beautiful setting for the latest live show from the album ‘Goddess Awaits'. 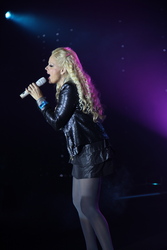 Cell phones, cameras and video cameras were raised to capture the moment

China and it’s 1.3 billion people have a great appetite for celebrity pop music singers and performers, but little access to Western shows. The government keeps a hand on all live events in the country and charges a steep performance visa to any visiting artist. Mariah Carey, Bob Dylan, Oasis, Smashing Pumpkins and Linkin Park were among the major acts to cancel their shows before even arriving in the country. At RMB 100,000 per performer it is cost prohibitive for any large club or promoter to bring in any lesser known international bands.

But, American Pop Singer Heather Schmid has found a place performing in China. Heather has developed a solid foothold, with more than 8 shows and tours through out China. From big cities like Beijing and Shanghai, to smaller cities like YueYang and PingXing, Heather has filled arenas and performance halls with eager audience members and her own pop/rock music.

Heather's latest tour brings her to the beautiful tourist destination city of Hangzhou, China. This large city is well known for China's most popular lake. West Lake is a serenity among a bustling city. This picturesque lake is surrounded by lush green mountains and tea tree farms. This historically significant location is filled with ancient buildings, stone caves and markers from heroic battles. West Lake even has its place on the back of the 5th version of the 1 yuan bill.

At West Lake, many enjoy a traditional Chinese style boat ride, the evening light and water show, or a stroll among the pagodas surrounding the lake. With 5 star hotels and international restaurants and brands, Hangzhou is a wealthy big city. Couture boutiques, tree lined shopping and European styled outdoor cafés host drinking and dining through the night. Entertainment, fashion and music are top quality, with many major Chinese stars hosting evenings at performance halls and clubs though out the year.

One such large performance hall, the Hangzhou Convention Center, hosted International Recording Artist, Heather Schmid on May 15, 2010 as part of a celebrity gala event in the city. Heather is fast becoming a familiar face in China as her song ‘Mo Li Hua’ plays on the radio and on ipods, her radio and TV interviews become more widespread and charity reach more well known. Heather’s many TV performances, magazine layouts and covers, and live shows are far reaching among the 1.3 billion population.

Heather sang from her latest album ‘Goddess Awaits’ two of the most popular singles. Heather’s second song performed, ‘Tell Me Your Story’ is about Heather’s involvement with children from a small village north of Hefei, China. In association with the Chi Heng Foundation, Heather visited the children to understand their struggles with HIV/AIDS in this city. All proceeds from ‘Touching Down’, Heather’s first single and the first song performed of the evening, benefit these children. During the performance the screens displayed photos of the children and from Heather’s visit and of the small village.

Then, Heather returned to her operatic roots with the aria ‘Quando m’en voh’ from La Boheme, to rousing audience support and surprise. Performing in a red gown from ‘Tony Bowls Collection’ and Swarovski crystal earrings, necklace and bracelet, the lights and 3 tiered staging wowed the crowd who rose to their feet at the end of the performance.

But, the night could not end without Heather’s version of the traditional song ‘Mo Li Hua’. This re-worked pop/dance song has played through out China on the radio and through the internet and has lead the resurgence of popularity to this traditional song. Cell phones, cameras and video cameras were raised to capture the moment.
Heather's enjoyment of China, it's people and culture is evident as she greats fans backstage, after the show or on the streets of Hangzhou.

Tell me your story