Following on the heels of the awesome Lightspeed iHelicopter, this latest model has an on board camera that means videos and snapshots can be taken while it is being flown around. 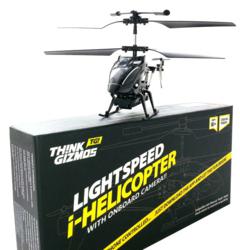 The original Lightspeed phone controlled iHelicopter has been a huge success since it’s debut in 2011, and the long awaited new version with onboard camera has just been launched by Paramount Zone Ltd.

The original Lightspeed version was voted TOP GADGET by the Sunday Times “Your Smartphone can already navigate you home, browse the web and even hold a conversation with you but now it can also help you to pilot a chopper” and there will shortly be a host of reviews of the new helicopter with camera from top publications.

The latest version has all the easy to control flight characteristics of the original, but has a camera mounted in its undercarriage that can take fun video and still pictures as the helicopter is flown around.

Such a feature would have been prohibitively expensive for a low value gift type gadget in years gone by, but technological advances have meant that this kind of innovation is now available at a very affordable price.

So, how does it work? Basically you download the free App to your phone (App called COPTER CONTROLLER is available in the Apple App store and Android play shop). The App works with iPhone, iPad, and supported Android Smartphone. The helicopter with camera can then be controlled from the App interface with standard controls or by the innovative motion control feature. With motion control the remote control helicopter can simply be manoeuvred by tilting the phone or tablet with the App on which is brilliant fun. Then video mode or photo snapshots can be enabled by 2 buttons from the App interface as well. Video is recorded on a micro SD card (2GB that is included in the purchase), that is inserted into the helicopter undercarriage. Then after flying is finished the SD card is removed from the helicopter and plugged into a computer, at which point flying videos can be watched, or photos viewed.

This iHelicopter with onboard camera takes remote control fun to a whole new level and is the perfect gift idea for any gadget fanatic over the age of 14.

This Lightspeed iHelicopter with camera is one of five helicopters in the remote control helicopter range for 2013 at Paramountzone.com.

Other options for those looking for remote control fun include the Turbo Drone RC Quadcopter or the Speed Master 2.4ghz Helicopter. These are around the same price point as the latest iHelicopter, and although they do not have on board cameras, they do have slightly better flight performance, and hence can be flown outside, even in windy conditions.

As well as directly from the Paramountzone website, all these remote control helicopter models are also available via Amazon UK. The iHelicopter iCam is currently on special offer, as well as the Turbo Drone Quadcopter.

The original Lightspeed iHelicopter reached as high as number 5 in the Amazon toys and games charts last Christmas, and the company are tipping the iHelicopter iCam model to go even higher for Christmas 2013.

Located in the UK, Paramount Zone was started over a decade ago by James Morris. All gadgets and gift ideas are shipped worldwide, from their fulfilment base in Horsham, West Sussex.

For any PR questions, please telephone or email the company via the contact page on the website.