2010 U.S. Human Rights Heroes Announced; Van Jones Joins the Petra Foundation to Recognize Four Women for Their Contributions to the Rights, Autonomy and Dignity of Others 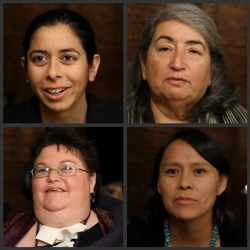 The 2010 Petra Fellows were recognized for their innovative work on behalf of families with disabilities, communities suffering the toxic effects of extractive industries, immigrants fighting for opportunity and fair treatment, and women members of the armed services suffering from trauma and abuse.

“These four women have shown great courage in doing the difficult and extremely important work to assert the rights and expand the opportunities of millions who are marginalized in America,” said Petra director Meg Fidler. “We are proud to give them a national platform and welcome them to a broad-based support network of advocates, activists and policymakers.”

In his closing speech, Van Jones, noted civil rights activist and pioneering advocate for a green-jobs economy, paid tribute to the new fellows as well as the 35 other honorees in the audience. “By acting on the American promise of liberty and justice, Petra leaders are protecting this country’s moral territory; they embody what I like to call deep, not cheap, patriotism. And I am honored to be among them tonight.”

Carrie Ann Lucas, a nationally recognized advocate for people with disabilities, was lead plaintiff in an epic seven-and-a-half year suit against Kmart that resulted in the most far-reaching accessibility class-action settlement in history before founding the Center for the Rights of Parents with Disabilities. A single mother of four disabled daughters, deaf, legally blind, breathing through a ventilator and navigating a power wheelchair, Lucas wages a daily battle to enforce the American with Disabilities Act, two decades after its passage, and make certain that parents like her and families like hers have access to the support essential to successful parenting. ”We should not,” she says, “be social-engineering families on the basis of things like poverty or disabilities.”

Wahleah Johns became co-director of the Black Mesa Water Coalition in 2003, helping to lead young Hopi, Chicano and Navajo activists in an unprecedented campaign to challenge tribal governors of Native American communities to halt the environmental damage caused by extractive industries and replace the royalties and jobs with sustainable green alternatives. In July 2009 the Navajo became the first American Indian nation to enact green jobs legislation. Johns, now serving as an appointed member of the Navajo Green Economy Commission, is working to build on indigenous skills to grow profitable local initiatives and to attract larger-scale reservation-based alternatives like solar power generation.

For more than 25 years, Maria Jimenez has worked behind the scenes as one of the major strategists in the long fight to protect the rights and dignity of immigrants in America. She mobilized “late amnesty applicants” to press for permanent residency. The resulting legislation passed in 2000 granted legal status to about 400,000 immigrants nationwide and there has not been any legislative progress since that time, She has led many delegations of immigrants and border residents to tell their stories in Washington; and worked with the ACLU and Mexico’s human rights commission to publicize the 5,607 deaths caused by US border security policies between 1994 and 2008. Jimenez tirelessly trains new leaders and builds the alliances necessary to win the battle for immigrants’ rights.

After being eagerly recruited for Officer Candidate School, having proved her mettle at every assignment, rising to the rank of captain, Anuradha Bhagwati spent five years battling systemic misogyny, racism and homophobia in the Marine Corps before concluding that the only way to win her fight was to take it outside. In 2007 Bhagwati founded the Service Women’s Action Network to address the full range of trauma and abuses suffered by service women and women veterans and help them overcome the obstacles for successful reentry to civilian life.

For videos of each winner, please visit http://www.youtube.com/thepetrafoundation.

About the Petra Foundation
Each year since 1988, Petra conducts a national search and nomination process to identify unsung grassroots leaders who are making distinctive contributions to the rights, autonomy and dignity of others. In addition to giving the Petra Fellows a personal financial award, the foundation amplifies their innovative models, fosters their collaborations and connects them to an expanding national support network. There are now 87 Petra Fellows working in 30 states.