Two California high school siblings are changing lives with their grassroots initiative to assist Indian farmers entrenched in poverty. Adarsha Shivakumar and Apoorva Rangan founded Project Jatropha to encourage the development of farmer-owned crops of Jatropha, a long living, economically viable shrub with seeds that can be converted into biodiesel. 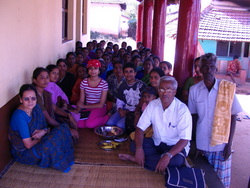 Two high school students of The College Preparatory School, Adarsha Shivakumar (age 15) and Apoorva Rangan (age 14), have just returned from India after successfully finishing the first phase of Project Jatropha, an inspirational mission aiming to simultaneously save the environment and boost the rural Indian economy. Adarsha Shivakumar launched the grassroots initiative last year, as a high school freshman, with the help of his eighth-grade sister, Apoorva Rangan.

"Project Jatropha's main goal is to enable farmers and women's self help groups entrenched in poverty to grow Jatropha either as a hedge crop or in intercropping on an economically viable scale," Adarsha Shivakumar says. "Carbon dioxide emissions are local, but their effects are global. Even though this nascent project has started on a small scale, our vision is that this is the beginning of a mass movement where small farmers collaborate with environmentally enthusiastic youth who will inherit the world."

Jatropha curcas is a small deciduous shrub with a lifespan of 40 to 50 years. The seeds it produces contain 30 percent oil, which can be converted into biodiesel. When Indian railways and road transport corporations started using Jatropha biodiesel, Jatropha became popular in India. However, the industry's growth is restricted to massive plantations owned by private for profit sector companies; small farmers cannot possibly acquire enough land to compete with massive plantations.

Project Jatropha is located in a rural belt of Karnataka, near Hunsur Taluk, Mysore district where a significant number of small farmers make a living by growing tobacco for export. To most subsistence farmers, this is the only crop that brings them money. Farmers cure the raw tobacco leaves in barns using firewood taken from the forest, the destruction of which is harming regional biodiversity. The Indian government recently signed the Framework Convention on Tobacco Control with the goals of cutting tobacco cultivation by at least half by 2020 and weaning farmers away from growing tobacco by offering compensation packages. Nevertheless, this solution will not be sufficient, as the money would run out and the government is promoting no alternative commercial crops.

"In his book 'Hot, Flat, and Crowded,' Thomas L. Friedman gives four criterion that any biofuel must meet: It must have a large positive energy input, not destroy biodiversity-rich land, must not release large amounts of carbon dioxide when grown, and must not solve one problem only to create another. Jatropha meets all these criterion, making it an ideal crop," Adarsha Shivakumar says. "Promoting Jatropha will encourage farmers to move away from tobacco by providing an attractive alternative, simultaneously eliminating the need for firewood, which will help preserve nearby Nagarahole national park and the trees in their own farms."

In June of 2008, Adarsha Shivakumar and Apoorva Rangan brought together Parivarthana, a non-governmental organization that helps farmers, and Labland Biotechs, a plant biotechnology company that grows high-quality Jatropha seedlings as collaborators to distribute 1,000 high-quality Jatropha seedlings to the farmers. Their work has been featured in the "Times of India" because of their recent visit to India, where they extracted 35 liters of biodiesel from 100 kg of seeds and distributed the oil to local farmers. Adarsha Shivakumar and Apoorva Rangan also formed partnerships with two rural high schools in the area. Callie Roberts, a sophomore in The College Preparatory School, has joined the duo for the second phase of the project.

The Rotary International in Hunsur honored Adarsha and Apoorva for their inspirational project, and many newspapers and local TV channels have featured their work.