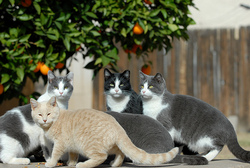 Community cats are in every neighborhood and town

The effort to eradicate homeless cats is not only an inhumane, costly approach, it also is futile. If killing community cats were the solution, free-roaming cats would be eliminated by now.

Best Friends Animal Society is trying to change the focus of national dialogue about the universal problem of free-roaming cats.

Sources estimate there are between 50 and 80 million homeless felines in the United States. They hide in alleyways, dart between houses and lurk behind businesses. Many of them are completely unsocialized, while others are tame housecats left on the streets when homes are vacated. In neighborhoods throughout the United States, free-roaming, community cats are part of the landscape.

Meanwhile, there is a lively national discussion about the best way to help these cats and reduce their numbers. There also is a raging debate on the extent of these cats’ impact on wild life and more specifically native wild birds, as well as litigation related to this particular issue in Los Angeles.

A recent ruling by a California judge (Los Angeles Superior Court -- Case #BS115483) has barred the City of Los Angeles’ Department of Animal Services from their nominal support of the humane community cat management policy known as trap/neuter/return (TNR). TNR demonstrably reduces the number of unsocialized (and therefore unadoptable) cats entering and being killed in U.S. shelters, and is universally advocated as the only workable method of controlling community cat populations.

The ruling favored the bird groups, but not necessarily the birds they seek to protect. Gregory Castle, interim chief executive officer for Best Friends Animal Society said, "The irony of this misguided court ruling is that banning TNR means there are more cats breeding out there to hunt birds. TNR actually helps reduce the number of community cats thus helping the birds."

The traditional practice in most areas of the country was to round up homeless cats in response to complaints and take them to animal control facilities where almost all of them were killed. TNR involves humanely capturing homeless cats in live traps, sterilizing and vaccinating them before returning them to their original location, where volunteer caregivers feed and watch over them.

According to Castle, TNR has proven to be the most successful method of humanely dealing with cat overpopulation, as well as the costs to municipalities to deal with the problem.

”Go into almost any shelter in this country and what you’ll see more than any other animal are cats,” Castle says. “Most of them have no future, and once they enter the shelter system, they rarely come out alive.”

Castle, who pioneered several feral cat initiatives in the state of Utah, points to a failure of communities to deal with the problem in the most sensible way -- encourage and facilitate the ability of cat lovers to limit cat colony populations through TNR management.

“Best Friends believes that the needs of free-roaming community cats and the requirement that municipalities help care for them are best encapsulated in the term ‘community cats,’” asserts Castle.

“The effort to eradicate homeless cats is not only an inhumane, costly approach, it also is futile,” Castle continues. “If killing community cats were the solution, free-roaming cats would be eliminated by now. In fact, catching and killing one group of community cats simply opens that niche for another group of cats.”

Best Friends Animal Society’s Focus on Felines campaign is a national effort to bring attention to the plight of community cats, and suggest ways that communities can control overpopulation, but continue to give these cats a good quality of life. Best Friends has launched several programs that feature the TNR method of managing free-roaming cat populations, including a major program in Jacksonville, Fla., where cat euthanasia numbers in the past year plummeted by 27 percent.

“While costs to manage cat populations vary from community to community, it costs about twice as much to trap and kill homeless cats in already overburdened shelters as it does to sterilize, vaccinate, and let them live out their lives,” Castle said.

But this isn’t the end of the story by any means. Bird protection organizations want cats trapped and killed because they say that felines prey on birds.

“There is no credible scientific study that shows cats to be a significant threat to birds,” Castle adds. “Songbird decline is mainly due to loss of habitat due to deforestation, urbanization and development, as well as window collisions (especially with high rise glass buildings), wind turbine generators, common pesticides and lawn care products.”

Best Friends’ Focus on Felines program has experienced success in both rural and urban communities in Los Angeles, Iowa and Utah, in addition to the successful governmental partnership with caregivers in Jacksonville. Those communities have embraced TNR programs, along with the practice of fostering and re-homing kittens and tame cats rescued from colonies. If the cats are at risk, residents follow strict relocation protocols to provide the cats a new home.

FixNation (Los Angeles)
Best Friends works in Los Angeles with FixNation, a nonprofit clinic that cares mainly for feral and stray cats but also operates as a low cost spay/neuter clinic. The first of its kind in the United States, the ground-breaking clinic leads the way as a model for community cat clinics around the country. The clinic works with local groups and individuals to battle cat overpopulation, providing free spay/neuter services for feral and stray cats, as well as shots and health checks. In addition, FixNation and Best Friends work together to lower the shelter euthanasia rates in East Valley, an impoverished area of Los Angeles. The program targets East Valley residents, offering TNR as an alternative to trap and kill. In the first year of the program, estimates are that East Valley shelter cat intake statistics will be reduced by five percent.

First Coast No More Homeless Pets (Jacksonville, Florida)
The killing of community cats has virtually ended in Jacksonville. The Feral Freedom Program is collaboration among the city of Jacksonville, First Coast No More Homeless Pets (FCNMHP), the Jacksonville Humane Society and Best Friends Animal Society. Cats who arrive at the shelter in traps are turned over to FCNMHP to be spayed/neutered, and then returned to their original trap location. Other communities are adopting this program as a way to save lives and taxpayer dollars.

No More Homeless Pets (northern Utah)
NMHP Utah and Best Friends work together with local governments to improve the shelter systems in northern Utah using tax dollars to combat the over population of community cats. The recent ruling by a California judge against support for privately implemented trap/neuter/return is the latest example of a misguided national approach that leads to more breeding of homeless cats and does nothing to protect wild birds, according to a national animal welfare organization.

Best Friends Animal Society is a nonprofit, membership organization building no-kill programs and partnerships that will bring about a day when there are No More Homeless Pets. The society's leading initiatives in animal care and community programs are coordinated from its Kanab, Utah, headquarters, the country's largest no-kill sanctuary. This work is made possible by the support of a grassroots network of members and community partners across the nation. “A better world through kindness to animals”