Maroon 5 are headlining the Honda Civic Tour and Kelly Clarkson will be the featured guest throughout the entire tour, Tickets now on sale at Doremitickets.com 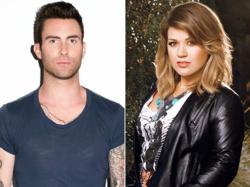 Maroon 5 front man Adam Levine has just announced that Kelly Clarkson will be joining them on Honda Civic Tour this summer. Rozzi Crane, who just wrapped up another tour with Maroon 5, will be opening for the band. The Honda Civic Tour kicks off on August 1 in St. Louis, Missouri and wraps up on Oct 6, 2013 Hollywood Bowl, Los Angeles, CA.

Maroon 5 consists of Adam Levine, Mickey Madden, Jesse Carmichael and Matt Flynn. They first shot to fame with their debut album Songs About Jane in 2002, and went on to win the Grammy Award for Best New Artist in 2005. Their second album It Won’t Be Soon Before Long topped the Billboard 200 chart in 2007, and their third album Hands All Over took up No. 2 position in 2010. The band has released its fourth album Overexposed in June 2012, which was a smash hit almost instantly. Their mission on the current 2013 U.S. tour is to further spread the popularity of the songs from this album.

Kelly Clarkson is an American pop rock singer, songwriter, and occasional actress. She rose to fame as the winner of the first season of American Idol in 2002, and was the runner-up of World Idol the following year.

Rozzi Crane born and raised in San Francisco, the 20-year-old singer-songwriter first fell in love with music in elementary school. Music has been her passion ever since and Rozzi is now currently enrolled in the University of Southern California's elite Popular Music program.

Doremitickets.com Your #1 Source for Honda Civic Tour Maroon 5 and Kelly Clarkson Dates Concert Tickets, Money Back Guarantee. Doremitickets.com is a retail website founded in 2009. Since launching in 2009, our website has helped connect thousands of live entertainment fans to the vast network of ticket brokers that list tickets on the doremitickets® Online Exchange. These professional ticket brokers offer more than 7.5 Million event tickets on our exchange every day.