The countdown to Passover has begun and so have the emails and phone calls to The Mohawk Valley Trading Company asking “Is your honey kosher?” to which the answer is yes. Passover, one of the most widely observed Jewish holidays, commemorates the story of the Exodus, in which the ancient Israelites were freed from slavery in Egypt. 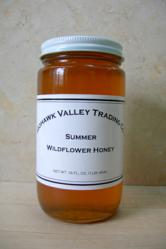 The countdown to Passover has begun and so have the emails and phone calls to The Mohawk Valley Trading Company asking “Is your honey kosher?” to which the answer is yes.

“Honey is considered kosher as long as it is 100% honey with no additives or dilutions.” said Mary Ross of the Mohawk Valley Trading Company where they specialize in raw honey. “Although our honey is not certified kosher it is one hundred percent pure honey, therefore it is kosher.”

Kashrut (also kashruth or kashrus, כַּשְׁרוּת) is the set of Jewish dietary laws. Food that may be consumed according to halakha (Jewish law) is termed kosher in English, from the Ashkenazi pronunciation of the Hebrew term kashér (כָּשֵׁר), meaning "fit" (in this context, fit for consumption).

Passover, one of the most widely observed Jewish holidays, commemorates the story of the Exodus, in which the ancient Israelites were freed from slavery in Egypt, begins this year the evening of Monday, March 25 and ends in the evening of Tuesday, April 2.

“Honey plays a significant role in Judaism.” Ross continued “According to religious text and scholars, when God told the Israelites that they would be freed from slavery in Egypt and led to the “Promised Land” it was described as "a land flowing with milk and honey" and an important custom during Rosh Hashanah meals is to slices of apples into honey. “

“The recent admission of two of the largest honey suppliers in the United States in their involvement in smuggling and mislabeling honey from China is testament to the fact that the only way to guarantee that you are getting pure honey is to buy directly from reputable honey purveyors.” Ross said “And those who do not want to risk an “issur” and are concerned about their “neshamah” should do likewise.”

Honey bees make honey by collecting nectar from flowers and regurgitating it into beeswax honeycombs inside their hive. Beeswax is a natural wax produced in the hive of honey bees of the genus Apis and one it’s most popular uses is beeswax candles and as an ingredient in natural personal care products.

Another product made by honey bees and used by humans is bee propolis which is a resinous substance that honey bees collect from tree buds and bark or other botanical sources and mix with beeswax, nectar and pollen. This mixture is used by bees to seal gaps in the hive and by humans for its health benefits and as a traditional, natural or homeopathic medicine.