Halloween is Horror Movie season, and Horror Movie Freak author and Best-Horror-Movies.com editor-in-chief Don Sumner has the perfect movies to watch over the 10 days to Halloween for the right mix of atmosphere, gore, fun and fright. 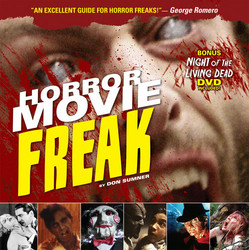 They’re coming to get you Barbra!

Halloween is the most anticipated time of the year many, especially hard core horror fans, aka ‘Horror Freaks’. Costume parties, haunted houses, jack-o-lanterns and trick-or-treaters come together to create a special time of frights and fun. Perhaps the best things of all about Halloween, though, are the horror movies.

Horror Movie Freaks watch a lot of horror films regardless of the time of year, but as Halloween approaches there is a ready-made excuse to watch them every day. For the rest of the world who do not live and breathe fright flicks, horror movies are perhaps an annual treat, a time to get reacquainted with those bumps in the night that had us hiding under the covers and begging Mom to check for monsters under the bed in our early years.

Whether one is a bona fide Horror Movie Freak, a casual horror fan or just someone seeking the right mood movies for this spooky time of the year, the question remains: “which horror movies should be watched?’ With all the choices that crop up in October, getting precisely the best mix of scary movies can be a daunting task; Hit the mark and the momentum begins for successful frightful festivities. Get the wrong films and the specter of a “ho hum, glad that’s over until next year” attitude could lead the unsuspecting to a regretful fate of watching only romantic comedies for another 12 months, and this tragic outcome must be avoided at all costs.

The book ‘Horror Movie Freak’ solves this dilemma with a listing of the 10 films to watch as the big night approaches, films sure to inspire furtive glances down shadowy hallways and nights safely hidden beneath the “covers of protection” until that under-bed monster wanders off in frustration.

10 (Friday, October 22) – Night of the Living Dead (1968)
Before this film zombies were not the flesh feasters we know and love today, but mindless slaves brought to the zombie state by voodoo. NOTLD (as horror freaks refer to this film) is not only a genre classic, but also a relatively easy springboard into the scarier of the film choices. “They’re coming to get you Barbra!”

9 (Saturday, October 23) – Children of the Corn (1984)
What would Halloween be without a film adaptation of a Stephen King chiller? This film ups the ante in the fear department yet is tame on gore. Besides, killer children gone berserk is the perfect primer before one faces the mass of disguised trick-or-treaters at the front door.

8 (Sunday, October 24) – Pumpkinhead (1988)
Pumpkinhead is a classic 80s horror movie that is perfect in a Halloween movie marathon. This one has witches, evil monsters, revenge and redemption – all wrapped up in a scary package of gloomy atmosphere.

7 (Monday, October 25) – Friday the 13th, Parts 1 and 2 (1980) (1981)
The work week has started so it’s appropriate to watch one of the workhorse franchises of the horror genre, Friday the 13th. Although Monday is a “school night”, parts 1 and 2 should really be watched together to get the whole picture. One must meet Jason, after all. Plus, a reminder of the perils of wandering outside while wearing only panties never hurts.

6 (Tuesday, October 26) – Darkness Falls (2003)
Now that the week is in full swing it is time to tackle childhood fears head on with Darkness Falls. What would happen if there really WAS a monster in the closet when Mom went to check? Wonder no more…

5 (Wednesday, October 27) – Black Christmas (1974)
Hump-day requires a jolt back into the Halloween spirit, and Black Christmas is just the ticket. This film is considered the first of the “Slasher” films ever, at least as we have come to know them. In “Horror Movie Freak” Black Christmas is the cut-off movie between the ages of modern horror and classics.

4 (Thursday, October 28) – The Texas Chainsaw Massacre (2003)
The weekend is approaching and preparations for the “big night” are in full swing, so it is time to get serious in the horror movie department. This remake of the uber-classic is more modern and gory, so recommended for most. Purists may opt for the 1974 original.

3 (Friday, October 29) – The Ring (2002)
Friday night before Halloween, kind of like hitting the top of the roller-coaster track before plunging into oblivion, and The Ring is just the film to prompt hurling over the edge. This is a remake of the popular J-horror film “Ringu” and for a new generation of Horror Freaks one of the scariest movies ever.

2 (Saturday, October 30) – Trick r’ Treat (2009)
This anthology film is all about the Horror Freak's favorite holiday, Halloween! Each vignette dives into a different urban legend or scary secret about the night the spirits rise and is a perfect celebration of the season.

1 (Sunday, October 31) – Halloween, Parts 1 and 2 (1978) (1981)
What to watch on Halloween night… Halloween, of course. It is necessary that both parts one and two be watched together to get the whole story. This is the film that showed the world the “rules of horror” and introduced the world to the ultimate scream queen Jamie Lee Curtis. Besides, even without the title this film IS Halloween. And yes folks, the boogey man IS real…

Don Sumner is the Editor-in-Chief of Best-Horror-Movies.com, served as the expert on Horror Movie Locales for USAToday and authored the book Horror Movie Freak to lead the casual fan of horror movies to True Freak Status. Horror Movie Freak, called “Fun and Enjoyable” by horror legend George A. Romero, “An Intelligent Treatment of the Genre” by actress Dee Wallace and “The Best Coffee-Table Book on Horror Ever” by Indie Scream Queen Debbie Rochon, is loaded with over 250 movie stills and original poster art, explores horror films in 15 different sub-genres, tackles the question “why do we like horror movies”, exposes banned horror movies, pays homage to the most loved Scream Queens, analyzes the current trend in horror remakes and much more. Horror Movie Freak is available in bookstores everywhere and online at Amazon, Barnes and Noble and Borders.