Real Fonts Now Available in Hosted CMS with No Setup

Webvanta partners with Typekit to deliver web fonts on sites built with its SaaS CMS, with no setup required 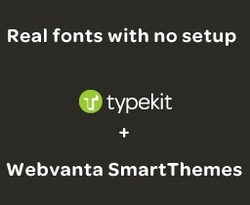 A hosted CMS like Webvanta is a great solution for designers who want to minimize technical hassles, and now they have instant access to a wide range of real fonts.

Good typography on the web has long been a challenge. The web was designed with the assumption that all fonts are provided by the user's computer, and this meant that fonts on web pages were limited to those you could count on being present on the vast majority of PCs and Macs.

To work around this limitation, designers have used images of type instead of real type, or JavaScript or Flash type rendering. These approaches have a variety of drawbacks, including the difficulty of updating the site and the need to use complex replacement techniques to make the type visible to search engines.

Two developments have recently made it possible to use a wide variety of fonts on the web:

1. Widespread browser support for the CSS @font-face rule, which allows any font to be loaded and used as real type.

2. Web font services, such as Typekit, which provide fonts that are licensed for use on the web.

With these developments, the tools are now available for designers to use a wide range of fonts, but most designers are not yet taking advantage of it. This is due, in part, to confusion over which services to use and how to set it up.

The fonts are delivered to the viewer's browser directly from Typekit's servers. All fonts are fully licensed for web use.

Jeffrey Veen, cofounder and CEO of Typekit, commented, "We're pleased to partner with Webvanta to make Typekit fonts available to designers using this hosted CMS, with no setup required. A hosted CMS like Webvanta is a great solution for designers who want to minimize technical hassles, and now they have instant access to a wide range of real fonts."

Unlike most other hosted content management systems, Webvanta was created for professional web designers. It gives them complete flexibility to create sites that look exactly how they want, while delivering the power to create database-driven sites without any back-end programming.

For details on using Typekit fonts with Webvanta, see Setting Up Fonts with Typekit and Webvanta.

Webvanta provides a hosted content management system that enables designers to create more effective sites with less effort. Founded in 2007 by two Adobe veterans, Webvanta offers site-building services as well as a hosted CMS, giving designers the option of using Webvanta as a complete solution for turning their Photoshop files into working sites.

Typekit is the easiest way to use real fonts on the web. Built around web standards, the service gives designers and developers a subscription-based library of hosted, high-quality fonts to use on their websites. Typekit has over 250,000 customers including some of the largest sites on the web today including The New York Times, Conde Nast, IGN, Twitter, and many others.