Groundbreaking DIY Platform Gives Everyone a Chance to Shine for Somalia; Thousands Around the World Take Action at IAMASTAR.org 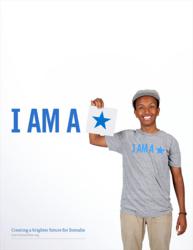 Forget doom and gloom—I AM A STAR is a hip and hopeful way to unite, inspire and empower individuals to shine for Somalia.

“I AM A STAR addresses Famine relief in a fresh and uplifting way ... it makes room for the solidarity and creativity of motivated people everywhere.”

People around the globe are leading an innovative effort to meet the Famine in Somalia head-on with a groundswell of powerful action. “I AM A STAR” is a new collaborative platform that brings together Somali Diaspora communities from around the globe, aid workers on the ground in Somalia, and people across the world.

A number of Somali artists are leading as creative partners in developing I AM A STAR, including:

The “do-it-yourself” (DIY) campaign inspires people to get involved at the local level, in any way they choose, to help provide Famine relief and shine a light on Somali culture and people. I AM A STAR is a message of solidarity and of human potential—and people from around the world are already stepping forward to “Be a Star” for Somalia, including:

Leading technology, innovation, and grassroots mobilizing groups designed the I AM A STAR platform to unite, inspire, and empower people from around the globe:

I AM A STAR serves as a springboard for inspiration and action. Unlike traditional campaigns, I AM A STAR is starting a conversation that will be owned and directed by participants through:

The I AM A STAR campaign is building on the momentum of the many young members of the Somali Diaspora who have taken action. Already, their work has been highlighted by Secretary of State Hillary Rodham Clinton. U2’s Bono has also drawn attention to the campaign. Word of I AM A STAR is spreading via social media, with blue stars popping up as profile pictures, and “I AM A STAR” emblazoned on Facebook walls and Twitter feeds.

The campaign’s STAR imagery draws on the flag of Somalia—a single white star of unity on a field of blue. Members of the Somali Diaspora and everyday citizens from around the world are featured throughout the campaign, each holding a sign with a blue star and proclaiming, “I am a star!”

The number of people affected by the Famine in Somalia is staggering, and I AM A STAR connects people to the impact of relief efforts on the ground. Relief teams from the American Refugee Committee are assisting people in Mogadishu and other parts of Somalia, providing clean water, latrines, health care, and other life-saving support. ARC is also supporting Benadir Mother and Child Hospital in Mogadishu—the situation there is dire. On average, staff receives 150 to 200 sick children each day. And every day, they see children die of preventable causes. The I AM A STAR website features firsthand-perspective videos from aid workers who have been on the ground recently providing relief.

I AM A STAR also highlights the culture of Somalia—a nation of poets, artists, mothers, fathers, children, innovators, farmers, businesspeople...human beings. A set of short videos feature members of the Somali Diaspora, who have family in Somalia, sharing their cultural traditions and hopes for the future of Somalia.

I AM A STAR is working to create a vibrant community of action, and to inspire other people to join in taking action for Somalia. The magnitude of the Famine crisis requires everyone to give their best and demands our action and our creativity. While visitors to the site are primarily encouraged to participate in the movement, they can also make a donation to the Somalia relief effort.

To join in the campaign, visit IAMASTAR.org. Check out the video and see how you can participate.

ABOUT THE AMERICAN REFUGEE COMMITTEE:
American Refugee Committee programs are built from the ground up. We work with people at the most vulnerable points in their lives, when they have lost everything to war or disaster. They let us know what they need most, and we work together to develop ways to help them get it. Our programs are as diverse as the people we serve, but they all work together for the same goal: to help people take back control of their lives. We have worked with refugees around the world for more than 30 years, and we help nearly 2.5 million people a year. We are partnering with the Somali Diaspora community to strengthen community in the U.S. while addressing the humanitarian crisis in Somalia. We are based in Minneapolis, MN. To learn more, visit ARCrelief.org.

CREATIVE PARTNERS INVOLVED IN “I AM A STAR” CAMPAIGN:

I AM A STAR Press Kit (PDF)I AM A STAR is a fresh, creative approach to Somalia Famine relief—a groundbreaking DIY platform that gives everyone a chance to shine for Somalia.

I AM A STAR (JPG)Now is your time to shine. How will you BE A STAR for Somalia?

S*MALIA (JPG)Aid is working. Share your belief in S*MALIA with other hip and hopeful stars around the world.

STAR (JPG)Find your inner STAR. Your energy and talent will inspire others to make I AM A STAR their own!