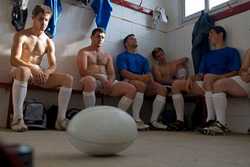 We have released figures previously that show our members are typically more cultured, more affluent. Their choice of sport reflects that. This is why activities like cricket and golf feature higher in the league table than football, pool and darts.

Rugby is often referred to by fans as 'a gentleman's game', but that could all be about change in light of new research from IllicitEncounters.com, the UK's largest extra-marital dating site. The website, which creates a non-judgmental platform for married people to conduct affairs, has shown that, of all those members interested in sport, rugby fans dominate the site.

"Rugby is often considered 'The Thinking Man's Game", says Sara Hartley, site representative. "We have released figures previously that show our members are typically more cultured, more affluent. Their choice of sport reflects that. This is why activities like cricket and golf feature higher in the league table than football, pool and darts."

"This is not to say IE is elitist. The numbers are quite evenly spread, and certainly show that across the site there is a great deal of variation within member interests."

IllicitEncounters.com has in excess of 340,000 members, and has just launched a new 'Reach Out and Reward' scheme, which pays advertisers £40 for each person who signs up for Gold membership as a result of their recommendation.

About IllicitEncounters.co.uk:
Illicit Encounters is the UK's longest running extra-marital dating site. It was started in 2003, beginning as a small agency with only a handful of members, but since its creation, has grown at a phenomenal rate. We now have over 340,000 members in the UK.

The aim of the site is to create a safe and nonjudgmental environment, where married men and women can meet each other. Illicit Encounters is a profile-based website, where each member has a personalised space stating who they are, what they're looking for and their interests. Users can talk freely on our new-improved chat system, or send each other messages through our internal mailing system.

The average Illicit Encounters member is a professional, often working in management or as an executive, and between the ages of 36 and 40. We have the most balanced ratio of men to women online than any other dating site.

For More Information:
If you would like more information about Illicit Encounters please contact Rosie Freeman-Jones at 02088199936. Illicit Encounters has a wealth of statistics on infidelity and related subjects, as well as many strong female and male case studies, available to talk candidly about their experiences.

IllicitEncounters.com is a trademark of Online Tech Support Ltd.