Image Line Software, the developer of FL Studio, has released Sawer, its latest software synthesizer plugin. Sawer is a powerful vintage modeling synthesizer that cuts through the mix with precise articulation and a punchy sound. Available at a reduced price until the end of March, 2009. 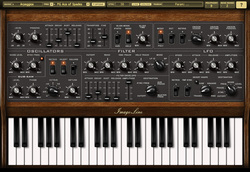 Sint-Martens-Latem, Belgium Image Line Software, the developer of FL Studio, has released Sawer, its latest software synthesizer plugin. Sawer is a powerful vintage modeling synthesizer that cuts through the mix with precise articulation and a punchy sound.

Sawer's filters have been modeled on the rare 1980s 'Soviet era' analog synthesizer, Polivoks. Meticulous attention has been paid to Sawer's filter and envelope design, ensuring a unique sonic character, reminiscent of the Polivoks hardware.

Just as the random variability of electrical components makes analog hardware unique, Sawer's oscillator design has also been touched by the magic of chance:

"While programming the SAW oscillator, I accidentally set some incorrect variables and immediately the sound gained bass, acquired some light but pleasing noise on the attack and an overall richer sonic spectra. Immediately I realized this was no mistake but a discovery and built on this sound, adding some frequency modulation to give it a touch of analog authenticity and so Sawer was born" explains Maxx Claster, Sawer's chief developer at Image Line Software.

As modulation is critical for achieving authentic analog sounds, Sawer has flexible modulation routing. An Envelope and LFO (Low Frequency Oscillator) source can be used to control a large number of destination controls. Further, the MIDI Modulation Matrix provides the ability to route MIDI controllers to most targets in Sawer.

Price and Availability:
Sawer is available in FL Studio and VSTi formats for Windows and Mac, as well as a Standalone and Audiounit version. Sawer is available for the introductory price of US $79 until the end of March. After this period, the regular price of Sawer will be US $99.

More information about Sawer, including audio demos, screenshots and a downloadable free trial version are available at Sawer's Web Site.