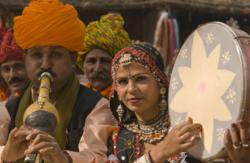 Indians love to preserve traditional culture and there are many aspects of Indian culture that has remained unchanged over the past several centuries. Folk music is one of them.

ShalinIndia, an online shopping store for exclusive handmade gifts has added a new product, folk musical instruments to its already large portfolio of cultural products of India. With this new product range, ShalinIndia contributes not only to promoting musical aspects of Indian culture, it also provides an alternative sales channel to India’s teeming artisans who make their living on making folk music instruments and selling them in the local regional market. “This alternative sales channel is significant because it enables the artisans to reach out to global customers through large and established online marketplaces like amazon and ebay”, said Shalini Verma, founder of ShalinIndia.

“Indians love to preserve traditional culture and there are many aspects of Indian culture that has remained unchanged over the past several centuries. Folk music is one of them. Same folk songs, accompanied by the same musical instruments, are sung in the villages of India over many generations. Little has changed in the style of the folk music in the Indian villages. However, there has been a big change in the economic aspects of the Indian folk music. Earlier folk artists and musicians used to be patronized by the people from adjacent cities. Now those city dwellers’ taste and interest in music has changed. People in the cities are now more interested in listening to pop music. This has led to the weakening of the ecosystem of the Indian folk music”, added Shalini.

“Six months back we began selling snake charmers music instrument pungis on online marketplaces of amazon and ebay. Upon seeing the commercial success of this musical instrument, we began to list other folk instruments on the online marketplaces. Soon we found buyers for products like shehnai, a flute like wind instrument that is usually played during weddings in Indian homes; iktara, a single string instrument that is used as an accompanying instrument by the folk singers; manjeera, a unique cymbal instruments played by groups of people singing hindu religious bhajans; damaru, a percussion instrument often used by the madaris who make their living showing monkey dances on the streets; and pajeb, feet bell cluster used by Indian dancers. Now we have launched all these instruments on commercial level, good quality instruments at fair prices”, explained an excited Shalini.

ShalinIndia, one of the premier online India shopping stores, specializes in selling ethnic Indian dresses, silver and gemstone jewelry from India, arts and crafts,sculptures and statues of hindu deities to customers around the world. Recently it has also added online some of the popular games of India, like golden playing cards, stoneware chess board and pieces, solitaire, labyrinth, ludo and snake and ladder. Through an arrangement with Amazon, ShalinIndia keeps its inventory in five countries US, UK, France, Germany, and Japan. This enables ShalinIndia to reduce not only delivery time but also shipping costs for its customers. This also eliminates any fears related to customs charges were the items shipped from India. ShalinIndia also sells to small boutiques in different countries at attractive wholesale prices. Boutique owners can buy in small lots directly at the website from available inventory or place orders for larger lots.