With the latest introduction of the Fixed Departure Tour for the year 2013-14, India Tour Packages is coming up with the brighter part of India Holidays tour. India Tour Packages reflects the world class, attractive tailor-made packages for complete India holidays. 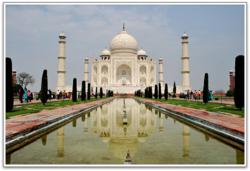 IndiaTourPackages.co.uk, the most trusted travel website, brings a fantabulous opportunity to explore the aesthetic land India, meticulously with the “Fixed Departure Tour-2013” progressively with other attractive tour package options including the Golden Triangle Tour, Chardham Yatra and tiger safari tour at different wild sanctuaries in India to showcase the major highlights of India.

The Fixed Departure Tour-2013 is designed in a very submissive manner to cover all the major destinations of India by presenting the famous Golden Triangle Tour in the form of special valuable package this year. The Golden Triangle India that introduces a classical tour to the heritage destinations like Delhi, Agra and Jaipur located at North India; now comes with more attractive and tailor-made packages for all the enthusiastic holiday makers. Making a great choice of other attractive destinations is much easier and successive now, since the tailor-made packages are designed exclusively according to the tourists’ requirements. And this year, India Tour Packages is presenting the tailor-made packages for India Golden Triangle Holidays by including the most famous Pushkar Fair and tiger safari tour.

Pushkar Fair that takes a privileged spiritual trip to Pushkar, 146 kms away from Jaipur, the capital city of Rajasthan; and with only 2 hours drive one can catch the annual five day camel and livestock fair. Besides this active participation in the trade fair, the Golden Triangle Tour will also take you to the other famous Rajasthani destinations including Jodhpur, Udaipur, Jaisalmer and Bikaner for a widespread royal Rajasthan tour.

Additionally, for the wildlife enthusiasts, the famous Golden Triangle is also customized for tiger safari holidays in India by including the Ranthambore National Park in Sawai Madhopur and then towards the famous Jim Corbett Tiger Reserve in Uttarakhand. These national parks are especially included for successive tiger tours; since the possibility of finding the maximum counts of Indian tigers is more at Ranthambore and Corbett reserves.

But apart from the Jim Corbett tour in the north, India Tour Packages also arranges for India’s other amazing wildlife options in its different sanctuaries like Bandhavgarh and Kanha in the central part, Kaziranga, Sunderbans and Manas in the East India and Nagarhole, Bandipur and Thattekkad Sanctuary in South India to bring an astounding elephant safari and birding tour in India.

The Fixed Departure Tour is also made for those who are interested in spiritual tour in India. For the month of May, India Tour Packages is bringing the famous Chardham Yatra-2013. This famous spiritual journey is commencing on the coming month and thousands of people are expected to visit the most popular Chardham shrines. The Char Dham Tour that includes a visit to the famous shrines of Uttarakhand namely the Yamunotri, Gangotri, Kedarnath and Badrinath Dham has all the spiritual temptations for one of its own kinds of salvation and pacified journey towards the Uttarakhand valleys.

“The Fixed Departure tour has been crafted especially for the UK travellers who tend to visit India for the shorter durations and want to cover all the major highlights of the nation. The tailor-made package is also designed for the worldwide tourists who are interested in the most popular Golden Triangle tour and famous pilgrimage sites like Chardham, Vaishno Devi, Ajmer Sharif complemented with other major attractions of adventurous, romantic, leisure and luxury trip for complete India holidays”, says Mr. Alexander Adamskii, the tour manager at IndiaTourPackages.co.uk

Along with the added package of the Fixed Departure Tour, the customized packages are also accomplished with other added touring activities including trekking and mountain biking tour at Garhwal, Kumaon, Sikkim and Ladakh in the Himalayas; South India classic tour, backwater & beach tour and much more.

With such featured part of India highlights presented by the IndiaTourPackages.co.uk, a trip for India holidays is going to be a successful event this year for most of the holiday makers.

The summary of the best packages of Fixed Departure Tour are mentioned below:

IndiaTourPackages.co.uk is a trusted name in the list of India Holidays Tours especially for the UK travelers. The website offers tremendous attractive packages for India Holidays including the adventurous, spiritual, trekking experience, backwater and beach tour options and wildlife attractions.