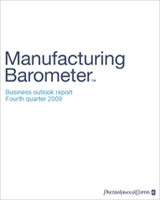 We are beginning to see cautious optimism about the economy in the industrial manufacturing sector.

The latest edition of the PricewaterhouseCoopers LLP Manufacturing Barometer reports cautious optimism about the U.S. and global economies among U.S.-based industrial manufacturers, according to the Q4 2009 report. Nearly half (47 percent) of survey respondents are optimistic about the U.S. economy's prospects, whereas only 5 percent were optimistic a year ago. Similarly, 41 percent of panelists who sell internationally are optimistic about the prospects for the world economy, compared to only 4 percent a year ago.

Indicating a continued hint of optimism, 35 percent of panelists believed the U.S. economy grew in Q4 2009, up 22 points from the prior quarter. Only 15 percent believed it declined (down 8 points from the previous quarter), while the prevailing opinion (50 percent) was that the U.S. economy remained unchanged. In regards to the world economy, the most typical view was that it remained unchanged (46 percent) for the second straight quarter. However, 34 percent viewed the world economy as growing, a 5 point increase, while 20 percent believed it was declining.

“We are beginning to see cautious optimism about the economy in the industrial manufacturing sector,” said Barry Misthal, U.S. industrial manufacturing leader for PricewaterhouseCoopers. “There is a sense that the worst is over, but recovery will be slow. These manufacturing executives are still facing a significant challenge to their growth targets from a lack of demand. The industry needs improved momentum in the overall business climate and a reduction in regulatory and legislative pressures."

Concern about lack of demand remains the chief barrier to growth over the next 12 months for 75 percent of industrial manufacturers interviewed, however this represents a drop of 20 points from the high of 95 percent recorded in the first quarter of 2009. Other areas of great concern include taxation policies at 53 percent, legislative/regulatory pressures at 52 percent, and decreasing profitability at 42 percent. Anxiety about oil/energy prices rose 8 points to 33 percent but remained well below the 2008 highs, while concerns over capital constraints remained low at 22 percent.

Thirty percent of those surveyed plan to add employees to their workforce over the next 12 months (up 5 points from last quarter), and only 12 percent plan to reduce the number of full-time equivalent employees (down 16 points from last quarter). Of the 30 percent of respondents planning to hire within the next 12 months, the most sought-after employees will be professionals/technicians (23 percent). Only 8 percent of those surveyed report that their companies have begun to rehire workers who were laid off during the economic downturn.

Inventory remained down for 49 percent of U.S.-based industrial manufacturers and up for only 12 percent, for a net minus 37 percent. This indicates that the anticipated inventory buildup has not begun as of Q4 2009.

In the next 12 months, 65 percent of industrial manufacturers plan to increase operational spending, similar to last quarter’s 68 percent. Among increased expenditures, new product or service introductions and research and development lead the way (37 percent each). Geographic expansion rose five points to 27 percent but business acquisitions dropped 10 points this quarter to 23 percent.

In the fourth quarter of 2009, 28 percent of panelists reported higher gross margins while 22 percent reported lower gross margins -- a net of plus 6 percent with higher margins but below the prior quarter’s plus 15 percent. Twenty percent of U.S.-based industrial manufacturers reported higher costs during the fourth quarter while 22 percent reported lower costs -- for a net minus 2 percent. On the pricing side, In Q4, 23 percent of respondents reported raising prices (up 6 points from the prior quarter) and only 15 percent lowered them (down 12 points from prior quarter).

With signs of recovery on the horizon, this quarter the Manufacturing Barometer probed executives regarding their focus on rehiring and restarting projects that were stopped due to the recession.

The projects that were put on hold during the recession that will most likely get the go ahead are in the areas of information technology (42 percent); new product/service introduction (38 percent); and geographic expansion (35 percent).

Overall, signs of recovery in terms of project restarts and rehiring are beginning to appear, but companies will proceed cautiously and conservatively in 2010, with an eye to the future.

About the Manufacturing Barometer

PricewaterhouseCoopers’ Manufacturing Barometer is a quarterly survey based on interviews with 60 senior executives of large, multinational U.S. industrial manufacturing companies about their current business performance, the state of the economy and their expectations for growth over the next 12 months. This survey summarizes the results for Q4 2009 and was conducted from October 13, 2009 through January 12, 2010.

PricewaterhouseCoopers (http://www.pwc.com ) provides industry-focused assurance, tax and advisory services to build public trust and enhance value for its clients and their stakeholders. More than 163,000 people in 151 countries across our network share their thinking, experience and solutions to develop fresh perspectives and practical advice.