'Invest For Kids' Raises More Than One Million Dollars 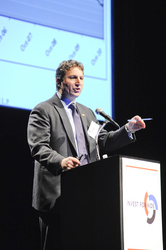 David Herro at Invest For Kids 2010

Top money managers from around the world presented their coveted ideas to a packed crowd of over seven hundred at the Second Annual “Invest For Kids” Conference on November 3, 2010 at Chicago's Harris Theater. The investable ideas conference raised over $1 million all of which will directly benefit seven local children’s charities.

Ticket prices for this high profile event started at $1,000 ($500 for those under thirty-five years of age), yet many donated well over the entrance fee further contributing to its success. Event co-founders Ron Levin, Goldman Sachs, and Ben Kovler, Blum-Kovler Foundation, underwrote all of the costs of the event so that 100% of the money raised went directly to the beneficiaries.

Some of the 2010 presenters included top money managers Sam Zell, “The new era will include less risk, less leverage,” Richard Driehaus, John Rogers, William Ackman, and Meredith Whitney. All of the speakers, most of whom do not speak or share their ideas publicly, provided their rare and generous appearances at no charge. Ackman, who recently donated $25 million to New Jersey public schools, said right now “we are bullish on housing, lowest financing ever.”

From value to growth in both debt and equity, the diverse group of speakers presented investable ideas to interested listeners. The speakers were brutally honest and ranged from being quite bullish to outright bearish. “That’s what makes Invest For Kids truly unique,” said Ben Kovler. “We unite the Chicago community at an event centered around great investment ideas from a broad group of top-notch managers. Exposing the attendees to the speakers’ ideas while simultaneously helping children’s charities in Chicago is a true win-win.”

Invest For Kids was a tremendous success. “By design, the seven charities we chose are all smaller organizations with modest budgets,” said Ron Levin. “Our gifts, approximately $150,000 per organization, will represent 10-20% of their operating budgets and allow these organizations to grow many critically important programs benefiting the lives of so many children.”