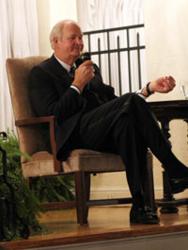 The Cleveland Storyteller sharing stories of Cleveland's past at a recent Willoughby Rotary Autism Project fundraiser.

The Willoughby Rotary Foundation announced that the first 34 iPads for children with autism would go to four local organizations. The initial recipients are:

Members of The Rotary Club of Willoughby had set a goal of providing 50 iPads to children with autism by the end of the 2013 Rotary year. The Willoughby Rotary Autism Project, or WRAP, is supported by their foundation. To provide a unique way to generate awareness and revenue, Rotarian Dan Ruminski volunteered to lead the fundraising efforts. Mr. Ruminski is known as Cleveland storyteller, educating people on the rarely known but spectacular history of Cleveland, Ohio. His series of "WRAP Cleveland History Talks" feature dinner and spellbinding stories, have attracted sell-out audiences and raised thousands for autism. His stories are based not only on published works, but also on interviews of the friends and descendants of the families of the era. He speaks without notes, teleprompters or lecterns – just The Storyteller in his chair, sharing unique stories of Cleveland's past. Mr. Ruminski has also been donating a portion of the proceeds from the sale of his book, "Cleveland in the Gilded Age - A Stroll Down Millionaires' Row."

To date, the club has raised over $17,500 to support autistic students in their educational goals, and will continue to raise money until the goal of providing 50 iPads is reached or surpassed. Club President Ron Boetger offered, "Our plan is to buy as many iPads as possible to assist kids with autism."

Research has determined that autistic children who have difficulty communicating can have their communication skills improved dramatically with iPads. The touch screen and layout make the iPad easier to use for individuals with coordination or learning difficulties. Typing is not required, as many apps feature bright, colorful icons that are manipulated by tapping and sliding. The iPad can help individuals with autism improve basic social, fine motor, language and communication skills. Users learn to communicate and express themselves with their iPad without the frustration they commonly experience.

The Willoughby Rotary Foundation accepts written applications from qualified 501(3)c organizations within the club's service area. The iPads must be for the exclusive educational benefit of autistic individuals.

About the Willoughby Rotary Autism Project
Willoughby Rotary members voted to help families in our community affected by autism by providing iPads and information on appropriate apps. To provide a unique way to generate awareness and revenue, Rotarian Dan Ruminski volunteered to hold a series of "WRAP Cleveland History Talks," featuring dinners and spellbinding stories, His efforts have attracted sponsors, sold-out audiences, and raised thousands for autism. Willoughby Rotary Foundation is a 501(c)3 charitable organization that has contributed over $250,000 to Rotary International humanitarian programs and more than 30 Ohio charitable causes since 1998.

About Cleveland History Lessons
The Cleveland Storyteller began in April of 2008 at Gates Mills Library. Forty people were expected and over 100 showed up. Motivated by his passion and the response to his talks, Dan continues to research Cleveland history, specifically the families of Millionaires' Row and their contribution to Cleveland's greatness during the years 1875-1929. He has created a collection of stories that are constantly updated and fresh and shares those stories at events and venues throughout the Cleveland area. His goal is to promote Cleveland nationally, rebuild Cleveland pride, and overcome outdated, uncomplimentary stereotypes.