Set for release on September 21, 2012, the iPhone 5 has certainly caught the interest of consumers around the World. One dollar resume building kingpin, OneBuckResume announces its giveaway of twenty-five free iPhone 5's to new customers. 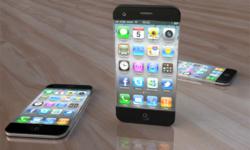 Twenty-Five iPhone 5 units will be given away to the first 25 users who have their professional job resume written at OneBuckResume.com on October 1st, beginning at 2:00pm...

The iPhone 5 has caught the attention of Apple enthusiasts around the World, with pre-orders selling out in only 10 hours. One dollar resume building kingpin, OneBuckResume, announces a giveaway of at least twenty-five free iPhone 5's on October 1st, 2012, to customers.

Advanced technology and new features have been implemented to the new iPhone Five, as Apple stores are expected to bring hordes of people to lining up before its Sept. 21 release date for the US, Japan, Britain, Germany, France, and 4 other countries. The mad dash to get the iPhone 5 will be repeated again on Sept. 28 when it goes on sale in 22 other countries.

Early iPhone 5 reviews state that the phone is going to be love at first touch. It's incredibly light and seems to be easier to hold. That means it might not be dropped as frequently as previous iPhones, reducing the chances of the glass on the display screen getting damaged.

The new iPhone is also said to be easy on the eyes, thanks to a larger screen, advanced Retina display, and HD technology, of course. Video and photos look even more lush on the iPhone 5's bigger and better screen.

At 4 inches diagonally, the iPhone 5's screen is a half-inch larger than previous generations, and Apple makes sure to take advantage of it. In addition, the extra space means you can now see five rows of apps on the home screen instead of the previous limit of four rows. Open the calendar and you can see five days of events on the screen in horizontal mode, instead of just three.

"Twenty-Five iPhone 5 units this week will be given away to the first 25 users who have their $1 [job] resume written at OneBuckResume.com on October 1st, beginning at 2:00pm. All winners are to be announced on twitter at 5pm PST. This isn't the first time we've had a giveaway of this magnitude, and it certainly won't be the last.." stated Public Relations director, Stephen Hanley.

Those who utilize OneBuckResume's one dollar resume service have the ability to choose from 60 different resume formats, followed by a simple questionnaire for the content portion of their resume. The entire process takes less than 5 minutes.

With the amount of attention One Buck Resume has drawn with its large giveaway promotions and constant media coverage, it is no wonder they've quickly grown into the largest resume builder online in 2012.