New iPhone Games Released at $0 Instead of $4.99, Dream Bot Studios Urges Gamers to Get Them Now Before They're Back to Regular Prices

According to a report, PETA slammed the "Assassin's Creed 4: Black Flag" for its whaling feature. For gamers who are sensitive to animal concerns, Dream Bot Studios suggested the "Flicked Off at the Movies," which is now available at $0 from $4.99, as an alternative. 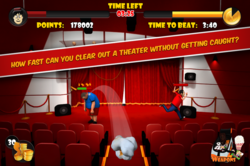 “Flicked Off at the Movies” features old-school fun without hurting anyone...

The new Assassin’s Creed 4: Black Flag was slammed by PETA. According to a report from the vg247.com, it was because of its “whaling” feature. So for gamers looking for an alternative, Dream Bot Studios suggested the new iPhone game “Flicked Off at the Movies.” Moreover, it said now is the best time to get it as its price was reduced to $0 from $4.99 for a limited time.

In the new Assassin's Creed 4, players could engage in the hunting of whales with a harpoon, said the vg247 report. And as it related, PETA declared on its released statement that it is “disgraceful” for any game to promote it.

Dream Bot Studios checked gamers' reactions to the issue. It shared that most of them were okay with the said “whaling” feature given the time period Assassin's Creed 4 was set on. However, for those gamers who are more sensitive about animal concerns, the company suggested other mobile games alternatives.

Particularly, Dream Bot Studios suggested “Flicked Off at the Movies.” Basically a 3D arcade-style game set in a movie house, it offers fun and enjoyment simply by flicking off candies and other “weapons” to targets. Assassin Creed fan or not, the company said that any gamer would love it.

“Flicked Off at the Movies” features old-school fun without hurting anyone, said Dream Bot Studios. With its hilarious characters, silly animations and sound effects and exciting encounters with the usher bosses, it added that anyone would surely have great time playing it.

The goal of the game is to clear the movie house. Players could do that by flicking off candies, toilet paper, soda, gum, popcorn and other items at movie goers at the front of the screen, explained the company. When the usher bosses come, gamers must also beat them, it added.

“Flicked Off at the Movies” is currently available at $0 from $4.99, related the Dream Bot Studios. And because the price-drop is just for a limited time, it encouraged gamers to download it now over the other mobile games before its regular price returns.

Gamers could get “Flicked Off at the Movies” 3D arcade-style game at the iPhone app store, said Dream Bot Studios.