On the sixth-month anniversary of Iran's detention of Dr. Arash Alaei and Dr. Kamiar Alaei--Iranian brothers who are known worldwide as HIV/AIDS physicians -- Physicians for Human Rights, Human Rights Watch, International Campaign for Human Rights in Iran, and The Harvard Friends of Alaeis, and are asking Iran to free them immediately. 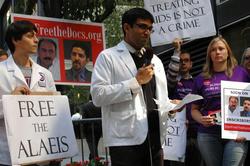 On the sixth-month anniversary of Iran's detention of Dr. Arash Alaei and Dr. Kamiar Alaei -- Iranian brothers who are known worldwide as HIV/AIDS physicians--international NGOs, academic institutions, and medical leaders from across the globe are asking Iran to free them immediately.

The doctors have been held in Tehran's notorious Evin prison since late June 2008. They were indicted this month on charges of communicating with an "enemy government" according to their attorney, Masoud Shafie. Iran should drop these illegitimate and politically motivated charges, the groups and leaders said.

In an exclusive interview with the International Campaign for Human Rights in Iran, Shafie said that the brothers have been indicted under article 508 of the Islamic Penal Code, which states that anyone found guilty of communicating with an "enemy government" shall be sentenced one-to-ten years in prison.

Bringing this charge against the Alaeis is likely to have a chilling effect on the Iranian medical community's ability to share their work and learn from global experts, which could undermine the health of the Iranian people.

The brothers have already been detained two months longer than Iranian penal code allows. According to Shafie, Articles 30-34 of the Code of Penal Procedure of the Islamic Republic of Iran allow for detentions but require that the investigating judge issue such detention orders for one month at a time and for no longer than four months.

The brothers are also legally eligible for bail, but the judge in the case has not issued bail nor held a bail hearing.

Dr. Arash Alaei is the former director of the International Education and Research Cooperation of the Iranian National Research Institute of Tuberculosis and Lung Disease. Since 1998, the Drs. Alaei have been carrying out HIV/AIDS treatment and prevention programs, particularly focused on harm reduction for injecting drug users.

In addition to their work in Iran, the Alaei brothers have held training courses for Afghan and Tajik medical workers and have worked to encourage regional cooperation among 12 Middle Eastern and Central Asian countries. Their efforts expanded the expertise of doctors in the region, advanced the progress of medical science, and earned Iran recognition as a model of best practice by the World Health Organization.
Media Contacts: