With a nod to classic '70s-style moviemaking, first-time writer, director and star will showcase and discuss his new film, "Leave Me Behind." 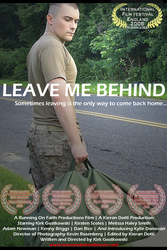 team accomplished in making it. It was a labor of love and has a powerful message that needs to be told.

A new independent film, "Leave Me Behind" by Running On Faith Productions, powerfully captures the debilitating effects of modern war on a young Marine and his family and friends, will be showcased this month by the The New York International Independent Film and Video Festival (NYIIFVF).

"Leave Me Behind" will run on Sunday, September 21, 2008 at the Village East Cinemas, located at 181 2nd Avenue and 12th Street in Manhattan.

Written, directed and starring up-and-coming industry talent, Kirk Gostkowski, the film examines the psyche of young U.S. Marine Christian Keller, a 21-year-old husband and father on leave in New Jersey before being stationed in Iraq. During three days, the film follows Keller, who believes he will die in combat, on his emotional journey to confront his family and friends, and ultimately himself, to tell the truths he's camouflaged for years.

"I'm honored that the NYIIFVF will be showcasing my film," said the film's creator Gostkowski, a Long Island native. "It's vindication for all the hard work the "Leave Me Behind" team accomplished in making it. It was a labor of love and has a powerful message that needs to be told."

"Leave Me Behind" looks to be a strong candidate for major distribution as well, with its timely-yet-timeless message about the traumatic effects of war on the young military.

"I wanted the film to have the look and feel - and mood - of classic '70s films like 'The Last Detail' and 'Five Easy Pieces," says Gostkowski. "They were a huge inspiration to me in becoming a filmmaker in the first place." Gostkowski also feels strongly that films should deeply examine the effects of war on the troops, both those who are returning from it and those who are about to be called-up.

"Leave Me Behind" is an important work that transcends the anti-war genre," notes author and veteran journalist, Larry Lange. He adds that Gostkowski's film deserves to be included in that lofty canon alongside "The Deer Hunter" and "Coming Home." Lange says that Gostkowski's portrayal of a Marine on the brink is "brilliant" in the film.

Gostkowski, still in his mid-20s, most recently appeared in a stage production of "True West," where he played the lead character of Austin, to rave reviews. He was trained in acting at Hofstra University's theatre studies program and separately studied under Alec Baldwin.

The film also stars Kirsten Scoles as the Marine's young wife and Melissa Haley Smith as his unrequited lover. Original music for the film is by the rock group, Light Up Nancy, whose song, "Limelight," is already a breakout hit on iTunes.

"Leave Me Behind" will be shown at 2pm, Sunday, September 21, 2008 at the Village East Cinemas, 181 2nd Avenue and 12th Street in Manhattan. Kirk Gostkowski will be on-hand to discuss the film, along with several of the actors and production people.

Tickets are available through Ticketweb. For more, visit the website for "Leave Me Behind".

About The New York International Independent Film and Video Festival
The New York International Independent Film and Video Festival was founded in 1993, and is recognized by the entertainment industry as one of the leading film events on the independent festival circuit. The festival hosts film, music and art events in the two entertainment capitals of the U.S., New York and Los Angeles, and attracts many global entries as well. Past NYIIFVF festivals have included the work of Andy Garcia, Ewan McGregor, Christopher Walken, Daryl Hannah, George Clooney and Willem Dafoe. Films that have achieved success through exhibition at the NYIIFVF include "Liberty Stands Still," (distributed by Lions Gate), "A Brooklyn State of Mind" (distributed by Artisan and starring Danny Aiello) and "New Rose Hotel" (distributed by Lions Gate and starring Christopher Walken and Willem Dafoe. Visit the website for the New York International Independent Film and Video Festival. This year's NYIIFVF runs from September 18-25, 2008 in Manhattan.

Kirk Gostkowski and Kenny Briggs in Leave Me Behind

Kirk Gostkowski and Melissa Haley Smith in Leave Me Behind

Kirk Gostkowski and Adam Newman in Leave Me Behind

Kirk Gostkowski and Kirsten Scoles in Leave Me Behind