More than half of civilian deaths or injuries since 2003 have been caused by small arms, while millions of mines and explosive remnants of war threaten the population. Handicap International teaches Iraqis to spot and avoid leftover weapons and wants progressively to add a small arms component. 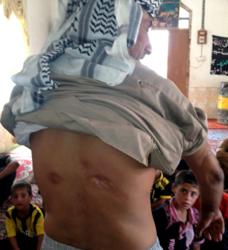 Mr. Fakhir Madhi, 58, is a father of seven from Al-Amarah district, Iraq. A former medical officer, Mr Fakhir got shot in the back during celebratory fire after an international soccer match in 2011,

On the tenth anniversary of the Iraq War, Handicap International is alarmed at the dire situation facing the country’s civilians. Nearly 250,000 civilians died or were injured in Iraq between March 2003 and January 2012—equivalent to more than 75 civilian victims every day. During the same period, civilians accounted for nearly 80% of deaths recorded in the country .

The number of small arms circulating within Iraq is on the rise, and very often these weapons fall into the hands of inexperienced civilians. More than half of civilian deaths or injuries since 2003 have been caused by small arms. “The holders of these firearms do not know how to use them properly and they are not given safety training,” explains Sylvie Bouko, Handicap International’s conventional weapons risk reduction technical advisor. “It’s very common, during celebrations, when a lot of people fire into the air, for people to be injured or even killed. This is totally unacceptable.”

The threat from millions of landmines and explosive remnants of war has increased the hardships. After decades of conflict, Iraq is thought to be the world’s most heavily polluted country for landmines and explosive remnants of war. It is likely to take several decades to clear more than 1,700 sq.km of contaminated land. Since 2001, more than 20,000 people have fallen victim to these weapons. Eighty percent of affected areas in the south consist of agricultural land farmed by the country’s poorest people. Without any other means of earning a livelihood, these small farmers put their lives on the line by entering the mined areas.

Handicap International has responded by stepping up its activities in Iraq. The charity has operated in the country since 1991, performing demining, risk education and orthopedic-fitting activities. Handicap International currently trains Iraqi workers to make thousands of people aware of the dangers posed by mines and explosive remnants of war. From April 2013, the charity hopes to add a risk education component to its activities to reduce the number of accidents involving small arms.

“We need the international community to support efforts to secure a far-reaching treaty banning the illicit trade of these arms,” says Elizabeth MacNairn, executive director of Handicap International’s U.S. office. The United Nations Conference on the Arms Trade Treaty meets this week in New York, and ends March 28.