Nominations Accepted through May 10 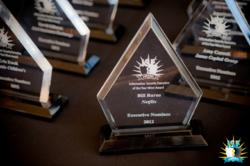 T.E.N. Announces Call for Nominations for ISE® West Awards 2013. The ISE® West Executive Forum and Awards are to be held August 6, 2013 at the Westin St. Francis in San Francisco.

Tech Exec Networks, Inc. (T.E.N.) announced today that it would be accepting nominations for this year’s prestigious Information Security Executive® West Awards now through Friday, May 10, 2013.

Awards include the Information Security Executive® of the Year and ISE® People’s Choice awards, which recognize executives who have made a positive impact on their organizations through risk management, data-asset protection, regulatory compliance, privacy and information security; and the ISE® Project of the Year, which recognizes a project completed during the previous 12-18 months that has had a significant impact on an organization’s risk management or information security posture.

Eligible nominees meet all appropriate criteria and are based in the West Region, which includes Alaska, Arizona, California, Colorado, Hawaii, Idaho, Montana, Nevada, New Mexico, Oregon, Utah, Washington and Wyoming. Executives or project teams can be self-nominated or submitted for nomination by supervisors, employees, peers, or technology partners. All nominations are sent to T.E.N.’s distinguished panel of ISE® judges for review and scoring. Anyone interested in nominating for the ISE® West Awards may download the nomination forms at: http://www.iseprograms.com/west.asp

“With security breaches making global news, the world is becoming more and more aware of the critical role information security plays in business success, but T.E.N. has been recognizing the hard work and ingenuity exhibited by these executives for more than a decade,” said Marci McCarthy, CEO and President of T.E.N. “We look forward to again shining a spotlight on the West Region’s most innovative projects and thought leaders.”

All nominees will be recognized at the ISE® West Executive Forum and Awards on August 6, 2013 at the Westin St. Francis in San Francisco. Organizations taking part in previous forums have included McKesson Corporation, Netflix, NBC Universal, VISA and UPS. Finalists and winners in both categories are announced at the awards gala that evening and recognized through press coverage and inclusion on the T.E.N. and ISE® websites.

About ISE® Award Program Series
For more than a decade, the Information Security Executive® (ISE®) of the Year Award Program Series has empowered security executives and their project teams to Connect, Collaborate and Celebrate. Recognized as the industry’s most prestigious IT Security award program, it has become the most anticipated award program for security executives and their project teams. Winners have included executives and project teams from leading organizations such as Nike, The Walt Disney Company, the United States Postal Service, Schlumberger, Texas Instruments, JPMorgan Chase & Co., Equifax, Comcast, PayPal, Northrop Grumman Corporation, and Nationwide.
Our distinguished ISE® Judges are past nominees representing a cross section of industries, including commercial, government, health care and academic sectors. For this reason, the ISE® Awards represent the best achievements of the year as evaluated by those regarded as the industry's most influential and successful thought leaders. Coupled with a one or two-day executive summit, the ISE® Awards are held across the country and Canada in major cities including Atlanta, Dallas, New York, Toronto, San Francisco and Washington, D.C. The ISE® Awards Program Series has reached more than 10,000 executives across a broad range of industries and has been a major influence in executives’ careers, knowledge sharing, and the development of peer-to-peer relationships.