ISLAM IN THE MODERN WORLD by Seyyed Hossein Nasr, Foremost U.S. Authority on Islam, Reveals Why Its at War with the World—and Itself

Seyyed Hossein Nasr discusses today’s hot button issues—including holy wars, women’s rights, the rise of Islamic fundamentalism, and the future of Moslems in the Middle East—in this groundbreaking discussion of the fastest-growing religion in the world. 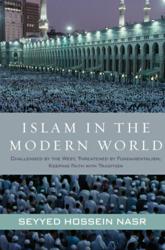 Islam In The Modern World by Seyyed Hossein Nasr

As Muslims grow in number and Islam’s role in world affairs becomes larger, we’ve begun to see the breakdown in a united fellowship among believers.

Extensive media coverage of a proposed Qur’an burning and protests against a New York City Islamic Center would lead many to believe that Islam’s biggest conflict is with the Western World.

Not so, says Seyyed Hossein Nasr, a University Professor of Islamic Studies and one of the United States’ foremost Islamic scholars. In Islam in the Modern World(HarperOne; February 2011; Hardcover; $29.99; ISBN 9780061905803), Nasr shows us how Islam struggles greatly with forces both outside and within its ranks.

As Muslims grow in number and Islam’s role in world affairs becomes larger, we’ve begun to see the breakdown in a united fellowship among believers. Iran’s clerics are split; militant fundamentalists clash with students from Islamic universities; and moderate Muslim-Americans are nothing like Wahhabis from Saudi Arabia. All the while the self-righteous rhetoric of extremist factions shapes lingering fears and prejudices, and the misunderstandings and friction between Islamic civilization and the modern West continue unabated.

Rising above the din to describe and defend traditional Islam, Nasr also hits on all the hot-button issues of current political concern to the West, including:

A steady guide through an increasingly factious religion, Islam in the Modern World is the definitive resource for anyone wanting a clear-eyed view of the world’s fastest growing religion.

About the Author
Seyyed Hossein Nasr is university professor of Islamic studies at George Washington University. The author of over fifty books, Professor Nasr is a well-known and highly respected intellectual figure both in the West and the Islamic world. Born in Tehran, raised from the age of twelve in the United States, and a graduate of MIT and Harvard, Nasr is well qualified to explain Islam to a Western audience, appearing frequently on Meet the Press as well as other national news shows.

ISLAM IN THE MODERN WORLD:
Challenged by the West, Threatened by Fundamentalism, Keeping Faith with Tradition
By Seyyed Hossein Nasr
HarperOne, an Imprint of HarperCollinsPublishers
January 2011 | $29.99 | Hardcover | ISBN 9780061905803