Jerusalem U’s 'Step Up For Israel' and the Jewish Week’s 'Write On For Israel' present a live Israel-advocacy session for New York high school students. 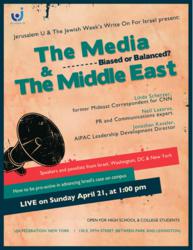 At Jerusalem U, we pride ourselves on combining the power of film with leading experts and educators, and practical activism opportunities for the next generation of Jewish leaders and supporters of Israel.

After participating in two compelling Israel advocacy training online sessions, high school students throughout the New York region have the opportunity to partake in a third, live session on combating media bias and proactively advancing Israel’s case on college campuses. The session is offered by Jerusalem U (formerly JerusalemOnlineU.com) and Write On For Israel.

“As a participant in a two-year Israel advocacy training program, I often feel like the only one of my peers who has any understanding of the biases Israel faces in the media,” said Leeza Hirt, a Write On for Israel student. “I am excited that now my friends will also have the opportunity to learn how to promote and defend Israel before we go off to college, next year.”

This is the third event in a three-session Israel-advocacy training seminar for teens. The first two events were webinars featuring Lazarus and Harvard Law Professor Alan Dershowitz, as well as a viewing of the Jerusalem U produced and critically-acclaimed documentary films "Israel Inside: How a Small Nation Makes a Big Difference" and "Crossing the Line: The Intifada Comes to Campus."

“At Jerusalem U, we pride ourselves on combining the power of film with leading experts and educators, and practical activism opportunities,” said Andrea Gottlieb, Executive Director of Jerusalem U. “The advocacy training seminar exemplifies this focus by merging all three elements for the next generation of Jewish leaders and supporters of Israel.

“We encourage all high school students in the New York area to participate in this unique event and learn, together with other teens, about promoting Israel on college campuses,” added Gottlieb.

The live event will take place at the UJA Federation in New York City on Sunday, April 21 at 1:00 pm. High school students are invited to register, free of charge, at
http://www.StepUpForIsrael.com/writeon-live.

Write On for Israel, a project of the Jewish Week of New York and funded by the AVI CHAI Foundation, is an intensive two-year program that trains a select group of high school students to become advocates for Israel through journalism.

Jerusalem U provides a wide variety of fresh and innovative Israel and Jewish education programs, merging the power of film with some of the world’s most respected Jewish theologians and Middle East experts.

Step Up For Israel, an initiative of Jerusalem U, is an international grassroots campaign that connects individuals and communities to Israel by providing a strong foundation in Israel education and activist opportunities.