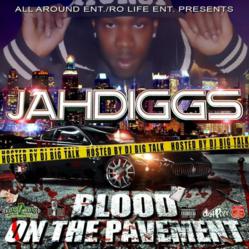 JAH DIGGS (Justice Always Honors Dedicated Intelligent Go Getting Survivors) is a Brooklyn born MC. He wrote his first rap at six years old and hasn’t stopped making music since. Influenced by Biggie Smalls, Wu-Tang, and Nas, he uses his experiences to create descriptive stories with important messages. Although he grew up in a rough neighborhood, he used music as a way to escape reality.

On a mission to make positive choices and continue to build his buzz, DIGGS is determined to make a name for himself in hip-hop. He has opened up for many artists including Jadakiss, Red Care, Uncle Murda, and more.

The new mixtape “Blood On the Pavement” is the first official mixtape by JAH DIGGS. It tells the story of his mistakes and the decision to work toward a better life. The new mixtape is now available for download or streaming.