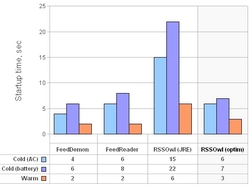 Many people still think Java is slow, and perceivable application startup delay is one of the main reasons for that.

Many people still think Java is slow, and perceivable application startup delay is one of the main reasons for that. Desktop Java features such as instant splash screen display are just attempts to subdue the symptoms instead of curing the disease. The problem needed a true solution.

Ahead-of-time (AOT) compilation of portable Java bytecode down to optimized native code has always been the distinguishing characteristic of Excelsior’s Java SE implementation, Excelsior JET. Conducted prior to deployment, on a developers system, AOT compilation effectively removes bootstrap overheads inherent to “traditional” JVMs and, in conjunction with implemented I/O optimizations, makes Java applications start as fast as their native rivals.

The company also published a comparative study backing the above statement. In it, a popular Java RSS feed reader is compared with two native Windows applications providing similar functionality. The optimizations implemented in Excelsior JET 7.2 resulted in 2x to 3x startup time improvement over the standard JRE, making the Java reader start as fast as the native ones.

A fully functional, time-limited evaluation copy of Excelsior JET 7.2 is available for download.

Excelsior JET is a certified Java SE technology implementation designed to help developers accelerate their Java applications, secure them fully against decompilers, and distribute Java software products without the need to use the JRE.

Please feel free to request a full version for review.