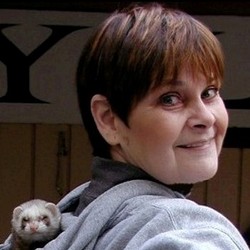 NBBA's success begins with the enthusiastic participation of authors and publishers and continues with our distinguished panel of industry judges who bring to the table their extensive editorial, PR, marketing, and design expertise

USABookNews.com, the premiere online magazine and review website for mainstream and independent publishing houses, announced the winners and finalists of The National "Best Books" 2008 Awards (NBBA) on October 20, 2008. Over 500 winners and finalists were announced in over 140 categories covering print and audio books. Awards were presented for titles published in 2008 and late 2007.

Described as a "saga of survival amid persecution in a richly detailed universe" by The Library Journal, "riveting fantasy" by Midwest Book Review, and "a well-conceptualized story which seems to reflect real history yet maintains definite originality." by ForeWord, Gibson attributes Quondam's successful appeal "to the story's strong female leads and their subtle and healthy message of can-do capability." When asked if her male readers had given her any flack about her strong female characters, Gibson responded with a smile, "It seems the guys like strong, intelligent women too. Plus there are plenty of strong, intelligent men in my books as well."

In addition to a full-time writing career, Jayel Gibson serves as an adjunct professor at Southwestern Oregon Community College where she teaches writing for publication. She is a two time Teacher of the Year award recipient for her innovative use of technology and video gaming in K-12 classrooms. Gibson is also the online book club moderator for Realms of Fantasy Magazine. She has been a contributor for Louisiana Parent's Magazine, Dallas Child Magazine, Education.com and Thefatherlife.com. She is currently at work on her next novel.

A complete list of the winners and finalists of the USABookNews.com National "Best Books" 2008 Awards are available online at USA Book News.

To schedule an interview or event with Jayel Gibson, or to request a review copy of Quondam please contact Shelby Sledge, Publicist at (512) 478-2028 ext. 227