JD Miller will be inviting an audience into his private studio at Samuel Lynne Galleries on May 18th from 6-9pm for an intimate look into his unique and innovative artistic process. 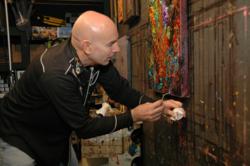 “One of the great joys of working in oil is that when you complete a work, you can stand back and enjoy it while it's wet, glistening, and alive”- JD Miller

Share in the dynamic excitement of the Reflectionist experience in an exclusive LIVE performance by JD Miller. Join Miller in his private studio as he physically engages with the canvas, employing a sculptor's application of oil paint to manifest his signature 3-D effect. In this one of a kind intimate encounter, witness Miller transform a blank canvas into a masterpiece, as he reflects the sensory environment of his studio and the live audience back into his spontaneous vision.

Miller's technique is based on a system of his artistic thought that abstractly emphasizes the mirroring of energy and human life in the universe. Through the development of this technique, Miller has formed the school of thought that has come to be known as Reflectionism. This burgeoning school of artistic thought attempts to express and physically manifest these positive - and otherwise abstract or intangible – forces, which Miller refers to as the "three dimensional envelope of life" through his 3D oil paintings. Miller's production of organic forms and natural tendency toward the capturing of light is the hallmark of this sculptural oil technique.

Just as Impressionism developed around a core group of artists in late 19th century Paris, Reflectionism is beginning to foster a following around a core group of artists in Dallas. Characterized by thin, visible, and textured strokes, Impressionism manifested the cultural changes in Paris, as the city began to emerge as the epicenter for art, music, and ethos for Parisians like Monet, Renoir, and Cezanne as well as expats like Morisot. In a similar manner, Dallas is growing rapidly as a cultural Mecca in the heartland of the United States, transforming rapidly in terms of demographics, economics, and investment in the arts. Reflectionism, in turn, is growing throughout the country and the world around key groups artists mentored by JD Miller, the school’s founder. This is characterized by the use of bold colors and the thick, sculptural application of oil paint (3D Oil), directly mirroring the times and place Miller and the other Reflectionists live.

“I call myself a Reflectionist artist because I believe that the universe mirrors each of us in a unique way. My goal as an artist is to interpret that phenomenon, and my art is a multi- dimensional reflection of life and the way I perceive the world.”- JD Miller