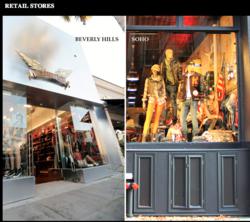 "We have had so much ongoing success with our two flagship stores, and I cannot wait to open a third location," said Robin Chretien, owner of Robin's Jean.

Robin's Jean announced today that the designer jeans company is launching a new flagship store in Laguna Beach, CA. This will be the brand's third store, in addition to the ones already established in Beverly Hills and New York.

"We have had so much ongoing success with our two flagship stores, and I cannot wait to open a third location. I believe Laguna Beach, a city that I personally enjoy so much, is a perfect choice to expand our brand in," said Robin Chretien, owner of Robin's Jean.

The store will be over 1,500 square feet, and will be located right in the heart of Laguna Beach. Just like the other locations, this store will capture the essence of Robin's Jean with unique jeans for men and women and modern decor emphasizing Robin's love of freedom and the open road.

Robin's Jean feature a unique collection of jeans, jackets, tops, hats and belts for men and women. Represented by the gold wings logo, Robin's Jean captures Robin's childhood dream of freedom and flight. Robin arrived in Los Angeles in 1996. His skills combined with talent, caught the eye of the best denim companies in LA. In 2005, he decided to incorporate his passions for designing clothes, riding motorcycles and vintage cars with his fascination of the American Indians and the spirit that embodied warriors and their fight for freedom to create his own line, Robin's Jean. Today, Robin designs all his looks in the United States, and his unique pieces truly embody his love for freedom
of the open road and the big sky.