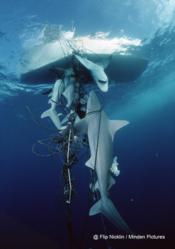 Many Shark species have seen population decline by more than 90% over the past few decades. CITES protection of these vulnerable species combined with adequate enforcement is critical for their survival,” said Jeff Corwin.

JeffCorwinConnect, co-founded by Emmy award winner and TV host of ABC Network’s Ocean Mysteries, Jeff Corwin, recently launched the first eBook in a new series Jeff's Explorer Series: SHARKS. The eBook, focused on sharks, raises awareness of these fascinating, yet vulnerable species, many of which today, are facing extinction. Over 100 million sharks are needlessly slaughtered every year by the shark finning industry to meet the insatiable demand for shark fin soup.

“Many Shark species have seen population decline by more than 90% over the past few decades. We now know that sharks are critical to the marine ecosystems where they live and when they face extinction, the entire ecosystem pays a price. CITES protection of these vulnerable species combined with adequate enforcement is critical for their survival,” said Jeff Corwin.

This week 177 governments from around the world meet at the Conference of the Parties to the Convention on International Trade in Endangered Species of Wild Fauna and Flora (CITES) in Bangkok to discuss the protection of numerous species. In order to raise the awareness about the importance of shark species, the recently released enhanced media eBook, Jeff Corwin's Explorer Series: SHARKS, is being offered by JeffCorwinConnect at a special promotion price of $4.99 this week. The eBook is available for all e-reader and tablet platforms like iTunes, Amazon, B&N.com and Vook.com. Learn more at http://www.JeffCorwinBooks.com

JeffCorwinConnect and Footage Search, who partnered and produced all of the media for these enhanced media eBooks, will donate a portion of the profits generated from all sales, towards conservation.

MORE ABOUR JEFFCORWINCONNECT
JeffCorwinConnect is a wildlife-nature focused, trans-media edutainment Company that develops branded mobile, digital and consumer products, creating online and onsite experiences, for kids and families. The fuel behind the mission of JeffCorwinConnect is to build a global community of people who care about the future of our planet and seek to better the world for themselves and their children. Join us at http://www.facebook.com/jeffcorwinconnect and become a global citizen today.

Hammerhead Sharks Are Being Consider For CITES ProtectionJeff Corwin