Jennifer Aniston Loves Her Dogs - Enough to Include Them in Her Wedding?

It’s no secret that Jennifer Aniston loves dogs. With news of her recent engagement to actor-director Justin Theroux; Dogington Post can’t help but wonder if she’ll include her dogs in her wedding plans. 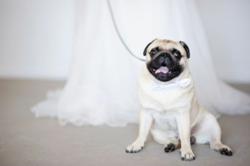 Will Jennifer Aniston Include Her Dogs in her Wedding?

People include their children in weddings all the time, and we think of our dogs as our children! It’s only natural that we’d include them.

A-list actress Jennifer Aniston made headlines this month when she and her Wanderlust co-star, Justin Theroux, got engaged last month after dating for more than a year. In fact, People magazine reported, the actress accepted Justin’s marriage proposal on his birthday.

Jennifer has a white shepherd named Dolly and had another dog, Norman, who sadly died last year, but whose name she had tattooed on her leg in memory of him.

Justin has his own rescue pit bull, Pooma, who, he described in a public service announcement he recorded for PETA, was found wandering the streets of New York with a heavy chain around his neck.

Together, the famous couple rescued a black and white pit bull-boxer mix puppy they named Sophie early this year.

With the entire buzz surrounding the engaged couple’s upcoming nuptials, Dogington Post wonders if Jennifer and Justin will make room for their pack of rescued pups in the wedding ceremony.

“It’s a bit unorthodox, but it’s not completely unheard of to include a pet in a wedding,” said Brandy Arnold, Content Editor for Dogington Post. “People include their children in weddings all the time, and we think of our dogs as our children! It’s only natural that we’d include them.”

The popular dog news site congratulates the dog loving couple on their recent engagement and encourages them to consider including their dogs when making their wedding plans.

Dogington Post reaches over 2.7 million dog lovers each week. The site includes tips that would be helpful for dog parents including Jennifer Aniston and Justin Theroux on how to include their dogs in their wedding ceremony; how to travel with dogs; and how to introduce a new dog into the family.