Set in today's Manhattan, Sugar Tower is a sharp and funny tale of a woman forced to reinvent herself as the platforms she built her life upon are dissolving beneath her feet. 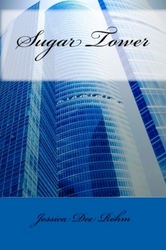 From veteran real estate broker, Jessica Dee Rohm, who has sold multi-million dollar condominiums for developers from Manhattan to Moscow, comes Sugar Tower. Set in today's Manhattan, Sugar Tower is a sharp and funny tale of a woman forced to reinvent herself as the platforms she built her life upon are dissolving beneath her feet. With uncanny perceptiveness, this novel delves into recent societal shifts that impact us all - the real estate bubble, the transience of wealth, the changing face of print journalism - in the context of a murder mystery that titillates and dazzles from beginning to end. The question on everyone's lips: Is Sugar Tower fiction...or fact?

In Sugar Tower, the great real estate crash has pulled the rug out from under one of New York’s best known developers. While he struggles to keep his family dynasty afloat, his wife is found dead in the swimming pool of his newest trophy condominium, Sugar Tower. The newspaper reporter covering the real estate beat at the City’s second largest daily becomes obsessed with investigating the death of the developer’s wife and inadvertently discovers secrets about Sugar Tower’s wealthy occupants, normally guarded by doormen and concierges, as well as a few about herself.

Sugar Tower was a quarter-finalist for the 2010 Amazon Breakthrough Novel of the Year Award, garnering the following comments from one of the contest’s expert readers:

“Fascinating and well-written. I was hooked pretty quickly…the fact-dense prose flowed well and clearly, giving no pause. It's not easy to introduce a number of characters early in a work without putting the reader off or generating confusion, but in this case it was cleverly done with enough description and involvement to make them stick. The murder scene and surrounding characters were well built and can be recalled as needed. The subject matter surrounding this mystery is timely and fresh without calling attention to itself. The demise of the printed news story, the consequences of a young woman building her career first, the wide dispersion of families, the trophy wife, the downside of privilege and the fragility of invested wealth are among themes woven into [Sugar Tower], any or all of which ...make this a first rate read.”

A lifelong writer and a serial entrepreneur, Jessica Dee Rohm started her career at the New York Times. Her first solo enterprise, Jessica Dee Communications, a marketing and communications company, grew to be the sixteenth largest in the country when she sold it to the then largest advertising agency in the U.S., Chiat/Day. She served as CEO for an additional two years, leaving in 1989 to found her second venture, Foreign Management Company, a real estate consultancy and brokerage firm catering to investors. Her clients have included the German government, Société Generale, Commerzbank, real estate developers in New York City, Russia, and Italy, as well as many corporations, trusts, and colorful “fiction-fodder” individuals.

The New York native graduated from high school as valedictorian of her class, at age 16. Winning a National Merit Scholarship, a Regents Scholarship, and a National Newspaper Scholarship, she attended Barnard College, graduating at age 19 with a B.A. in English literature. She then earned her M.B.A. in management and marketing from Columbia Business School. This year she will be awarded her second master’s degree, an M.F.A. in creative writing, from Manhattanville College. She is the mother of Elisabeth Rohm of TV hits Law & Order and Heroes.

Jessica Dee Rohm has published numerous feature articles in magazines ranging including regular columns for both Restaurant Hospitality and The Cornell Quarterly. In addition, she has published many newspaper articles in the New York Times, Hartford Courant, Real Estate Weekly, the Hersham Acorn newspaper chain, and others. She has been the subject of several feature stories and profiles in publications ranging from the Fairfield County Business Journal to the New York Times, the New York Daily News, the New York Post, Entrepreneur, the Palm Beach Post, and Glamour. She has been featured in two books—The Confidence Factor by Judith Briles and Whiz Kids by Marilyn Machlowitz.