Jimmy Buffett and the Coral Reefer Band will be bringing their good time tunes to many US cities through August. Now is the time to secure Jimmy Buffett Tickets for this summer from eCity Tickets. 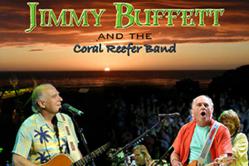 With Jimmy Buffett Tickets in hand, fans will have the perfect summer-time concert experience. In the 38th tour of his storied career, Jimmy Buffett will delight die-hard fans, dubbed the Parrot Heads, and casual listeners alike. Since his first tour in 1976, his classic, laidback songs have had audiences singing of pirates and margaritas in the summer sunshine.

Getting his start in Nashville bars in the late 1960s, Jimmy Buffett reached acclaim a few years later with such classic vinyl records as Living and Dying in 3/4 Time, A1A, and Changes in Latitudes, Changes in Attitudes. Some of the most well-known songs in American music, including “Margaritaville,” “Come Monday,” and “Cheeseburger in Paradise,” were written by Buffett over these many years. And, now is the chance to see Jimmy Buffett and the Coral Reefer Band perform these hits live.

Parrot Heads around the country will be lining up to see their beloved island poet in 15 select cities, including Atlanta, Austin, Detroit, Chicago, and Cincinnati. Jimmy Buffett concert tickets will be a hot item – hotter than a Key West beach in July. The first date on sale will be Jimmy getting back to his roots at the Bridgestone Arena in Nashville, Tennessee on April 27th.

The Nashville concert will mark the beginning of yet another summer tour of a long and celebrated career. This year, the tour will be named “Songs from St. Somewhere,” reminiscent of Buffett’s signature lyrical escapism. Let the winter months melt away for good as you buy tickets to see the guitar-strumming pirate born “200 years too late.” The Jimmy Buffett tour will culminate with a two night bash in Wantagh, New York at the Nikon at Jones Beach Theater on August 21 and 22.

The Buffett concert experience always includes a mix of his top hits, some deeper tracks, and some well-loved cover songs. So, whether you know the entire catalog by heart or simply want to hear your favorites in person, Jimmy will give you your own perfect island vacation. Start the party early too, if you choose, by joining the many Parrot Heads who flock to venues to tailgate hours before the first song.

Though it is easy to imagine Jimmy Buffett as a “beach bum” because of his laidback lyrics, he really is a multi-talented, renaissance man. Of course, he is a prolific singer-songwriter, but he also moonlights as an author, humanitarian, and businessman. Make no mistake though, the man knows how to start a party and ignite a good time among hundreds of concert goers. Do not miss a chance to see one of the most sought after concert experiences in North America this summer. eCity Tickets specializes in those hard to find up-close seats, even when other brokers are sold out. Jimmy Buffett Tickets are now available at eCity Tickets.