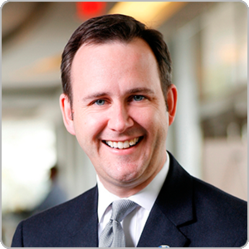 Scott Monty has been called "an unstoppable force of nature" and "the best corporate social media lead on the planet."

Ranked by Forbes as one of the top 10 influencers in social media, Scott Monty has been called "an unstoppable force of nature," "the best corporate social media lead on the planet," and Alan Mulally, the CEO of Ford Motor Company, called him "a visionary." A recognized thought leader in the social media industry, Scott has been featured in hundreds of news and business publications in print and on the web, in dozens of books, and on a variety of mainstream media, including NBC, NPR, CNN and The Wall Street Journal.

The Internet Battle Plan’s founder and co-keynote speaker is author and highly-acclaimed automotive industry expert, Jim Ziegler. Notorious for assembling the most successful entrepreneurs and leaders in the automotive industry for his Internet Battle Plan conferences, Monty is the ideal lead speaker for the conference. Explains Ziegler, “As social media is being integrated into many facets of the dealership, having Scott share firsthand internet strategies and sales techniques that have moved he and Ford Motor Company to the top of success is invaluable to dealers. From blogger relations to marketing support, customer service to internal communications, Scott is a strategic advisor on all social media activities across the company. As a result, he has an in-depth understanding of how to leverage online relationships for sales and profits.”

About Us:
Ziegler SuperSystems is an automotive training and consulting organization based in the Atlanta, GA area. President Jim Ziegler has been a keynote speaker at National and State Dealer conventions, and has trained over 100,000 Dealers, Managers, and Industry Manufacturer Executives.