The sustainable jewelry brand sets a standard for the luxury industry with the launch of several ‘green’ initiatives. 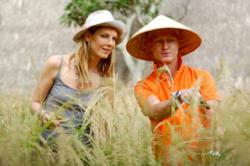 This Earth Day, John Hardy, the sustainable luxury jewelry brand, will show its continued commitment to the environment with the introduction of several exciting Green initiatives. GUY BEDARIDA, Creative Director and Head Designer of the brand and supermodel and fervent environmentalist, ANGELA LINDVALL, will present the newest styles of their jewelry collaboration, an exclusive behind-the-scenes video of Lindvall’s recent trip to Bali, and the new environmentally friendly jewelry packaging.

John Hardy started its celebration of Earth Day weeks in advance with the introduction of their new recycled silver and cotton cord charity bracelet. Two hundred of the bracelets were donated to Christie’s Bid to Save the Earth Event on March 29, and the bracelet was just launched on the John Hardy Online Boutique, where it is sold for $65. All proceeds will benefit the Natural Resources Defense Council.

Lindvall and Bedarida will also unveil their Hijau (meaning "Green" in Balinese) Dua collection. The duo's sophomore collection is handcrafted out of recycled sterling silver or 18k gold and features a chic sliced bamboo motif. The collection is a part of the brand’s “Wear Bamboo, Plant Bamboo” program. For each piece of Hijau jewelry purchased, John Hardy will plant a certain number of bamboo seedlings to offset the carbon emissions used for its travel and advertising.

In addition, John Hardy will debut a video diary of Lindvall’s recent trip to Bali on the official John Hardy Facebook page a few days before Earth Day, April 19, 2011. Fans will learn why Lindvall is so involved in the brand’s green initiatives as she kicks off the first day of planting for the “Wear Bamboo, Plant Bamboo” program; alongside Bedarida and CEO DAMIEN DERNONCOURT.

Finally, John Hardy is introducing a 100% recycled and recyclable anti-tarnish envelope to ship its goods. The packaging is expected to eliminate tons of unnecessary plastic waste and will further the company’s sustainable efforts.

The launch of all three initiatives highlights John Hardy’s mission to be “Greener Every Day” and continues the effort by the company to donate and plant a total of 600,000 bamboo seedlings for the Bali Province Government’s “Bali Clean and Green” program.

John Hardy is a luxury handmade jewelry brand, founded in Bali in 1989. The company’s collaboration between designers and artisans yields jewelry that unites the mastery of the talented jewelers who served Balinese kings with modern design interpretations.

In 2007, John Hardy retired and sold the company to Damien Dernoncourt and Guy Bedarida (Creative Director & Head Designer). Together, they have expanded the brand worldwide and while adhering to the brand's mission of "greener every day" - the belief that a business can prosper with respect to the people, nature and the environment.

Angela Lindvall and Guy Bedarida in Front of Kapal Bambu