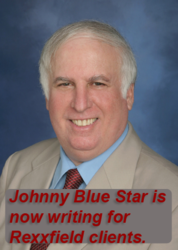 I am honored to be able to work with Michael Roberts and Rexxfield to address the needs of people whose reputation has been unjustly tarnished by online predators.

Rexxfield.com, a company that specializes in the removal of online libel, defamation, privacy invasion and illegal speech, today announced its appointment of Johnny Blue Star as Team Lead for Media Content. Johnny is currently the President of New Galaxy Enterprises, a media company located in California, which will handle a wide variety of content development functions for Rexxfield and its clients.

Rexxfield was founded by Michael Roberts and specializes in the removal of online libel, defamation, privacy invasion and illegal speech. Roberts, a licensed private investigator said that he "...utilizes digital and social forensics analysis to uncover the anonymous antagonists behind Internet smear campaigns leveled against Rexxfield clients. We then provide electronic discovery, litigation support and expert witness services to unravel some of the technical aspects for the judge and/or jury."

“A smear campaign defense has three sides,” says Roberts, “The first side entails detective work, identifying and prosecuting the anonymous bloggers, the second is removing the negative online presence, utilizing proprietary search engine optimization technique.  The third side is retooling their client’s marketing approach as well as repairing the damage and restoring trust to our client’s customer base. Often this involves the creation of a wide range of media content. We have chosen Johnny to oversee this practice because of his diverse experience in the mass and multl-media.”

Michael Roberts said of Johnny, "Although our respective backgrounds and outlooks are diverse, we have some things in common, we are both passionate about social justice and both victims of Internet fraud and defamation." To a degree, part of Michael’s case has been widely publicized because his chief assailant in the campaign to destroy his reputation was his ex-wife, who is now serving a life sentence for first-degree murder. After their divorce but some years before her arrest, she set her sights on destroying Michael’s career and reputation. The case has been highlighted on a number of high profile TV shows in the United States and Australia- on Dateline NBC, the Australian 60-Minutes, the Oxygen Network, in Fox News, and most recently the Discovery Channel in a series called "Fatal Vows".

Johnny’s case is not well known but like all cases of defamation, traumatic and costly to the victim. Johnny said, “I met Michael by accident after exhausting many theoretical avenues to redress an Internet smear campaign by a self-serving former client and partner. But I didn’t know how. The more I had tried to evolve my own strategy, the more lost I felt. But when I searched for an Internet anti-defamation group, I found Michael’s survey and call to action for victims of Internet defamation. In minutes, I found myself on the phone to Michael, a call which opened the doorway a personal solution but also eventually an enhanced career direction.”

Blue Star added: "I am honored to be able to work with Michael Roberts and Rexxfield to address the needs of people whose reputation has been unjustly tarnished by online predators. I am convinced that Rexxfield, although essentially a private crime fighting organization, has a powerful awareness of the civil liberties it is aiming to protect. I am happy to participate to not only help correct some of the astounding wrongs perpetuated against innocent people, but also to help lobby for adequate legal protections for businesses and individuals throughout the world."

After considerable discussion, Roberts felt that he had found someone who could assist him in the next stages of development of his company. “Currently we are dealing with servicing large corporations, small businesses and individuals who have been ravaged by Internet predators,” Robert says, “They need their image rebuilt from scratch. With all the things we do for clients, publicity has generated a demand for a dramatic TV series by a successful production company as well as a tasteful reality show. We are now working on a teleconferencing support group for victims, a pod-casting show about the international calamity of unchecked defamation, video interviews with victims and a series of online and offline publications. We needed someone who could oversee all these things and not get totally dizzy.”