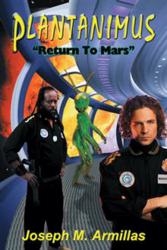 In his new novel “Plantanimus: Return to Mars” (published by iUniverse) – a sequel his 2011 book “Plantanimus: Awakening” – a powerful psychic leads a group of freedom fighters in a struggle for their survival in a harsh, interplanetary conflict.

After Kelem Rogeston, a 27th century Martian psychic, returns from the planet Plantanimus to Mars, he finds that an evil Earth organization called Phalanx has enslaved his home planet. He quickly falls into the role of the leader of a small group of resistance fighters. Now he must use the psychic powers he honed while on Plantanimus to free his people from the powerful psychic soldiers of Earth who fight to preserve their Martian slave laborers.

“Kelem nodded slightly and rubbed his chin. ‘The phalanx has been trying to gain an upper hand in the psychic arena for a long time. But to my knowledge they've never been able to recruit any Terrans whose psychic abilities could match those of Martians. And there's a very good reason for that. You see Rusty, the Martian flu epidemic changed the course of human development on Mars.’”

“Plantanimus” also references an environmental disaster that occurs sometime late in the 21st century, setting the book up as a voice in the growing concern for the environment in today’s world. “Our planet is possibly heading to a point of no return environmentally,” says Armillas. “We could be facing a terrible future within the next 30 or 40 years if we don’t do something about global warming and the use of fossil fuels.”

About the Author
Born in South America and raised in the United States, Joseph M. Armillas is an actor, musician, writer and veteran of the U.S. Army. He is also the author of “Awakening,” the first of the Plantanimus Trilogy. He lives in Los Angeles.

iUniverse, an Author Solutions, Inc. self-publishing imprint, is the leading book marketing, editorial services, and supported self-publishing provider. iUniverse has a strategic alliance with Indigo Books & Music, Inc. in Canada, and titles accepted into the iUniverse Rising Star program are featured in a special collection on BarnesandNoble.com. iUniverse recognizes excellence in book publishing through the Star, Reader’s Choice, Rising Star and Editor’s Choice designations – self-publishing’s only such awards program. Headquartered in Bloomington, Ind., iUniverse also operates offices in Indianapolis. For more information or to publish a book, please visit iuniverse.com or call 1-800-AUTHORS. For the latest, follow @iuniversebooks on Twitter.
###