From blueprinting with an arc lamp to digital media, Merritt thrives for 105 years with large credit to the innovations of the last 25 years. 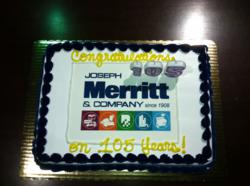 We did it—we’re here and we are stronger both financially and in our products and services.

Last week was no ordinary week for Joseph Merritt Company. March 5, 2013, marked the 105th birthday for this graphics and imaging company. Anyone familiar with the printing industry knows this is no small accomplishment. Headquartered in Hartford, CT, with six locations in New England, Joseph Merritt Company has had to reinvent itself over the years. President and CEO ED Perry attributes its success to being flexible, innovative and diverse.

A lot has transpired since Joseph Merritt Company (Merritt) first opened its doors in 1908 as a blueprinting company. Starting in 1945 Merritt expanded its offerings to include darkroom work, xerography, and white prints. It then became a complete reproduction service bureau and had the largest stock of drafting supplies and equipment in the state of Connecticut. Merritt built its reputation among the architectural, engineering and construction industries.

In 1987, Ed Perry and Ted Crew purchased the company. Even though the blueprinting and engineering documents were still a flourishing trade, they knew that the improvements in technology and computer-aided drafting (CAD) were going to bring changes to the business. The new owners developed a practical strategy to grow the company during the digital revolution. Their goal was to diversify the company from the architectural, engineering and construction industries, and to expand their talents for meeting the demands of these fields into other industries.

Adopting the early digital applications in the print world, Merritt purchased a Canon Laser Color copier system. It was one of the first in the country. The color copier industry was hugely successful, and prompted Merritt to go after digital color graphics in a big way. In 1993, Merritt purchased one of the first 3M Scotchprint Systems, which was the birth of its large-format digital printing department, which Merritt refers to as “Big Color.” To keep up with technological advances, Merritt also purchased a Xerox Docutech, which was the first variable digital printing system; this in turn birthed its small format division: Print Solutions.

Ed Perry reflected on one of Merritt’s first large jobs. It entailed wrapping the Skyships at Killington Ski Resort in Vermont. Designer Deena Prestegard of SIRGE, Newton, MA, approached Merritt about the new 3M Scotchprint system. The question was whether this type of an application could compete with airbrushing the graphics onto the gondolas. The airbrush quote was not only higher, but it also required more time and only offered a one-year warranty. Merritt’s quoted turnaround time was around three weeks with a five year warranty and included installation in Switzerland before being shipped to Vermont. Merritt won the contract and the graphics are still on the Skyships approximately 18 years later.

Merritt continued to build its portfolio and its offerings. The strategy for the company was to stay upgraded within the digital print world and to pursue any line of business closely related to digital information and distribution of the information, whether by printing or by digital means. In 2004, the emerging product group was Merritt Scanning. This group converts or digitizes printed documents into easily retrievable archival databases. This group’s success provided for the development of Merritt’s own retrieval software.

Today the company has five divisions:Big Color, which focuses on large format printing, banners, vehicle graphics, billboards, etc.; Print Solutions, which does smaller format, brochures, direct mail, and various marketing materials; Scanning, which handles information and document management and is focused on digitization and retrieval; Construction Document Technologies, which services blueprints and engineering drawings plans and specs.; and Printers, Sales, and Service, which sells and leases larger printers and service contracts and sells supplies such as inks and paper.

In January, Perry celebrated his 25th anniversary as Merritt’s CEO and president. When asked about the biggest challenge the company has faced, Perry talked about the recent recession. “It was by far the worst one we have had to navigate.” Perry noted that the company had to restructure to survive. “Merritt redirected its efforts toward more profitable products, and asked employees to double up on jobs as a team effort.” Perry ended with, “We did it—we’re here and we are stronger both financially and in our products and services.” Today Perry says it is still a struggle to manage costs in a price-competitive world, but Merritt maintains a high level of service and quality and puts weight into retaining and developing customer relationships.

Not everything over Perry’s 25 years has been all business. When Perry first started with the company, it only had two locations, Hartford and Danbury. When Perry first visited the Danbury location, the manger was alerted he was coming. He shut off all the lights and hung a “Gone Fishing” sign in the window. Perry arrived and looked around and was just about to leave before the manger let him in on the joke.

On another occasion, the former VP of the company, Don Sobol, had Perry arrested as part of a fundraiser for the March of Dimes. The Hartford Police Department would come and “arrest” nominated citizens and the bail money to be released was used as a donation to the charity. Sobol did not tell Perry anything in advance. The police came into the building and escorted Perry to a police car on Franklin Avenue. Perry was frisked and cuffed and put in the squad car. Perry did not know what was happening until his employees gathered around laughing. And yes, Perry did pay bail!

Perry said that his proudest moment was in 1995 when he received, on behalf of Joseph Merritt Company, the Greater Hartford Chamber of Commerce Technology Business Leader of the Year award. Keeping up with technological advances both in printing and in document management have kept this company thriving. Looking to the future, Perry says the company will continue to establish itself in emerging technologies, digitization and large color products.