Wurlitzer award winning pianist, Michael Jensen, whose solo piano album, "Over the Rainbow," has been christened with rare photographic permission from Judy Garland's daughter Lorna Luft, and also of Judy's birthplace of Grand Rapids, Minnesota, has been launched to major entertainer at the world's most revered Indiana Wizard of Oz Festival based on the 1939 MGM film classic, Wizard of Oz, in Valparaiso, Indiana this September 15 – 17, an engagement that also features Academy Award Winning Margaret O'Brien star of MGM film classic, "Meet Me in St. Louis"

Michael Jensen's, "Over the Rainbow," now in its second printing, is also a tribute to the song's composer Harold Arlen, Lyricist E.Y. Harburg, and to his late mother Helen Jensen, and late sister, Jacquilyn Dingmann, artist and founder of the Judy Garland Museum. His first album, "Red Sky at Night," has been sold out for over a year. More than 60,000 Wizard of Oz fans worldwide reach their Rainbow's End in Valparaiso, Indiana, forty miles east of Chicago, every year. The Festival's Silver Anniversary DVD soundtrack will feature Mr. Jensen's renditions of the National Endowment for the Arts/Recording Industry of America's rated number one American popular song of the 20th Century, "Over the Rainbow." His album also includes two original songs composed by Mr. Jensen.

“I simply chose songs I had bonded with since I was a child, and 'Over the Rainbow,' was one of them...that's with I mean my first album, 'Red Sky at Night'. The director of the Judy Garland Museum purchased it and since one event has lead to another where I've played for three Judy Festivals in a row. I entertain visitors once in a while throughout the year at the museum, actually on a nice grand in Judy's living room. It's a beautiful museum.”

While performing at the 2006 Judy Garland Festival, Michael Jensen had the great fortune of meeting the Indiana Wizard of Oz Festival's President Brenda Maynard, and Vice President Dolores Spargur.

“There should have been a camera for you to see the looks on our faces when we heard your music. We didn't say a thing. We just looked at each other and knew you were it,” expressed Mrs. Maynard when she and Mrs. Spargur met with him for a live performance in Judy's living room after reviewing both his, "Over the Rainbow," and "Red Sky at Night," CD's.

“I could hardly believe they chose me. I'm so honored to be part of such a world class event, and even one that includes Academy Awardee Margaret O'Brien.”

Mr. Jensen upholds that if it were not for four of his sisters, and his late mother, Helen Jensen, he would have never recorded.

“I owe a lot to them. My mother and I were real soul mates. I took care of her through her later years; but she always cared for me too. She was a great inspiration and motivator for me... to all my siblings. Also my sisters, four of them, at one time or another said I should record. I'll also never forget when a fan of my music approached me at the 2004 Festival here, Sam Morris from Tinley Park Illinois... 'you know, you play 'Over the Rainbow' in so many beautiful ways you should create an album based on just that song'. Just in that split second he said that he had such a major impact on me, I mean it came like a voice out of heaven. I'll never forget it. But... really too the courage must come from within... I mean really to come out with what's so deeply held in one's soul... the music. I never believed in myself, and that's what's so important in life... believing in one's self. It's not easy to do that, I mean express my inner most self to many. But at the same time there's this other powerful force, a deep earnest to share... to give these dream journeys I've found in music. It's a bold expression of my love for all.”

Michael's late sister, Jacquilyn Dingmann, who died of breast cancer in 1999, was both a talented visual artist and founder of the Judy Garland Museum in 1975.

“She loved my music. As she suffered with breast cancer she listened to it a lot. It was only a cassette tape at the time; but she loved it.”

Also Mr. Jensen reveres his hometown's late 1800's Central School that contains the Itasca County Historical Society's collection of Judy's artifacts, a museum apart from the actual Judy Garland Museum. The actual Judy Museum, beautifully situated on the southern edge of town, contains the world's largest collection of Judy's artifacts which has been supported through many charitable funds including gifts from the Bob Hope Estate, and singer/actress Barbara Streisand.

Old Central School was going to become a parking lot. Singer/songwriter Bob Dylan even came to visit it early on when Mrs. Dingmann had the first Judy Museum there, probably on his way to his hometown of Hibbing just 40 miles away.

“If it wasn't for Jackie's (Mrs. Dingmann's) efforts it (Central School) would have been wiped off the map. It's the school Judy Garland and her whole family I'm sure walked by many times. I'm sure Central School was attended by Judy's two older sisters. Their house was only two blocks away. It's just up the street from where they performed in the New Grand Theater, another place that's I'm sure in plans to tear down, what should be a national historic place actually. I visualized them walking by from where their house was just west of the school on their way to the theater, the girls goofing off once in a while like kids do. So I wrote a song about it. I call it, tentatively, 'Sauntering Down Pokegama Avenue'. I never even dreamed that I'd be performing that song at the world's largest Wizard of Oz Festival, and with events that include Margaret O'Brien. The song will be on my next album, 'There's A Land That I Heard Of'.”

Hear clips, purchase his album or companion 11x17 color poster by credit card, and read past news articles about Michael at: http://www.michaeljensenpiano.com Michael Jensen is also the subject of an hour long television documentary being produced by Valley Access Channels of Stillwater, Minnesota, to be aired this fall 2006. 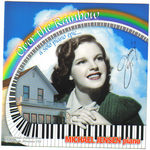