LA-based pop rocker Julia Michaels has announced the release of her debut self-titled EP, available everywhere on July 20th, 2010. The EP is being distributed by BFM Digital, a leading digital music aggregator and distributor of independent music. 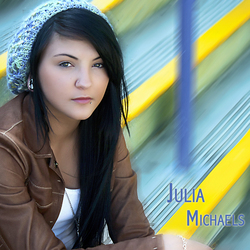 LA-based pop rocker Julia Michaels has announced the release of her debut self-titled EP, available everywhere on July 20th, 2010. The EP is being distributed by BFM Digital, a leading digital music aggregator and distributor of independent music.

At only sixteen years old, Julia Michaels gained particular attention when her single, Born To Party (released on June 17th), was featured on MTV’s hit TV show The Hills, exposing her music to a wide audience that responded immediately. The single, with it’s fun, steady dance beat, became a quick success among the viewers and created demand for more music.

The new EP, produced by Anthony Anderson and Steve Smith of SA TrackWorks Productions and Joleen Belle and out on the SA Trackworks Label, incorporates upbeat songs like Born To Party while also giving the listener a taste of Julia’s softer song-writing side. Each of the four tracks exudes passion and boast soulful lyrics often missing from such youthful releases. Lead track, Bailey, is a heart-wrenching coming of age ballad that showcases Julia’s strong vocals laced over melodic piano and strings. The EP wraps up with the punchy, sing-along track, Next To You, sure to be a favorite among listeners.

"Whatever "it" is, she has more of "it" than most singers I've ever heard." - Ken Lewis, Grammy Award-winning mix engineer and producer