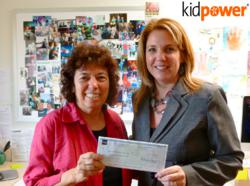 We are proud to support the life-saving skills that Kidpower brings to children and the peace of mind gained by their parents.

Kidpower, an international non-profit organization, received a $5,000 grant from Wells Fargo Foundation on Friday, to support child safety programming. The check was delivered in person to Kidpower's headquarters in Santa Cruz, CA by Wells Fargo AVP/Manager Michele Bassi, who worked on Kidpower's bid for the grant.

"I am delighted and grateful to accept this grant from Wells Fargo on behalf of Kidpower," says Irene van der Zande, Kidpower Founder and Executive Director. "Their long-standing support helps Kidpower protect children from bullying, abuse, kidnapping and other violence."

“We are proud to support the life-saving skills that Kidpower brings to children and the peace of mind gained by their parents," says Bassi. "Protecting our children and enhancing their self-esteem is what makes Kidpower an amazing organization.”

The Wells Fargo Foundation first awarded Kidpower a grant in 1989 when the non-profit was just getting started, says van der Zande.

"Right after the big Santa Cruz earthquake, Wells Fargo Foundation gave grants to help out nonprofits," says van der Zande. "That start-up grant had a huge impact on our ability to keep going. Since then, Wells Fargo has provided years of support, as our organization has grown from a small local program to an international non-profit."

Kidpower Teenpower Fullpower International®, known as Kidpower® (http://www.kidpower.org), is highly recommended by experts worldwide for taking a positive, skills-based approach to preventing bullying, abuse, kidnapping and other violence. Instead of using fear to teach young people about danger, the Kidpower Method™ makes it fun to learn to be safe, building habits that increase the skills and confidence of kids, parents, teachers and other caring adults that can last a lifetime.

Kidpower has served more than 2 million people of all ages and abilities, since its founding in 1989, offering personal safety workshops through more than 20 centers and offices across the US and around the world, safety curriculum for K-12 classrooms, and the Kidpower.org library of free articles, podcasts, videos, blog posts and low-cost publications, which are used by hundreds of thousands of people every year. Visit http://www.kidpower.org for more information about "people safety" skills for children, teens and adults and training opportunities in your area.

"Bullying – What Adults Need to Know and Do to Keep Kids Safe" by Irene van der Zande, Founder of Kidpower.org. Available now on Amazon.com.