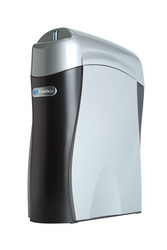 Many water quality issues develop over time as chemicals leach into wells, old water pipes degrade or source water changes. With the new K5, homeowners can help ensure they have a solution to their water problems. It produces the high-quality water they want, when they want it, at flow rates and production rates unmatched in the market.

Consumers who want the highest drinking water quality can now have made-to-order water, thanks to the Kinetico K5 Drinking Water Station, the first customizable and expandable drinking water treatment system. This first-of-its-kind system was developed by Kinetico Incorporated, a leading provider and pioneer of water treatment innovations worldwide. The new system raises the bar by removing more contaminants than any other NSF-certified drinking water system on the market. It also provides faster flow rates and higher production rates than other comparable drinking water treatment systems. Available through Kinetico's national dealer network, consumers can learn more about the system and locate their local dealer at http://www.kinetico.com/Locator

The new K5 is the only system created to meet consumers' ever-changing treatment needs. The expandable system solves for existing water problems as well as those that may develop in the future. Simply stated, it's the last system consumers will ever need to buy, because it will never be obsolete. The longevity of the K5 is due to its interchangeable, five-cartridge filter design, which allows consumers to choose from nine available cartridges -- each solving a particular water problem -- based on their unique water quality needs.

While solving water quality issues may not always require five cartridges, consumers can add or remove cartridges to suit their changing water treatment needs. The K5 is also expandable, allowing for supplementary cartridge installation should the need arise. In addition to its customizability, it produces approximately 25 percent more water than other comparable systems, removes more contaminants than most systems on the market, and produces biopure water with the Purefecta® Guard, the highest quality water available through water treatment. With the Mineral Plus cartridge, a consumer can introduce minerals, such as magnesium and calcium, into the treated water if desired. Some health experts claim that these minerals may be beneficial to your health. More specific information on the cartridges is available at http://www.kinetico.com/K5.

"Knowing that water quality varies and different water problems arise, we've developed the first truly customizable drinking water treatment system that can take care of the consumers' evolving water quality needs," says Shamus Hurley, president and CEO of Kinetico. "Many water quality issues develop over time as chemicals leach into wells, old water pipes degrade or source water changes. With the new K5, homeowners can help ensure they have a solution to their water problems. It produces the high-quality water they want, when they want it, at flow rates and production rates unmatched in the market."

Like other Kinetico water treatment products, the K5 operates without electricity, using water (hydropower) to run the system. Not only does the K5 solve water problems better than other treatment systems, it is also one of the fastest flowing systems available on the market, producing more than 40 gallons of biopure water a day. This system offers homeowners nearly twice the daily production rate of drinking water systems using a typical air charge tank. It has faster faucet flows, which is an excellent benefit to consumers frustrated by slow product water flow issues. For consumers concerned with water conservation, this product is one of the most efficient drinking water systems on the market.

Currently, nine different water filters are available; the installed combination depends on the exact nature of the homeowner's water problem and his or her particular desires. While an expanded line of cartridges will be announced in 2008, the current cartridges solve for a wide variety of water problems. Available filtration cartridges include:

Kinetico Incorporated
Headquartered in Newbury, Ohio, USA, Kinetico is a leading manufacturer of water treatment systems. An extensive network of Kinetico dealers serving residential and light commercial customers has helped more than a million people in nearly 100 countries experience the benefits of better water. Since 1970, Kinetico has prided itself on creating unique water treatment systems that serve customers in an expanding variety of residential, commercial, industrial and municipal applications. The company also has offices and facilities in the United Kingdom, Canada, France and Denmark. Further information is available at http://www.kinetico.com.