KrankcycleRx, Club One and Matrix Team Up to Help Those with Physical Disabilities and Operation Freedom Veterans 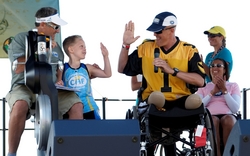 The Krankcycle is fully wheelchair accessible and allows Timothy Karcher, as well as other physically disabled individuals stay fit. We’re delighted to be able to give back to this hero who fought for all of us.

KrankcycleRx, Club One and Matrix Fitness today announced that they have donated a new Johnny G Krankcycle by Matrix on behalf of the Challenged Athletes Foundation (CAF) to Lieutenant Colonel Timothy Karcher, who was recently injured in the line of duty and lost both of his legs.

The Krankcycle was presented to Lt. Colonel Karcher at CAF's annual "Tour de Cove" event in San Diego on October 25th by eight-year-old Cody McCasland, a fellow double amputee, among 300 riders and with Karcher's family present. KrankcycleRx, an authorized distributor of the Johnny G Krankcycle by Matrix serving those with physical disabilities and other special populations, and Matrix Fitness of Johnson Health Tech, made the equipment donation in conjunction with Frog's Fitness, the Southern California brand of Club One, a leading health club company and long-time supporter of CAF.

Karcher, the recipient of the Krankcycle, was serving his third tour of duty in Iraq and is commander of the Army's 2nd Battalion, 5th Cavalry Regiment, and 1st Cavalry Division. He was injured on June 28th just outside of Baghdad. Reports indicate an EFP - a bomb containing explosively-formed projectiles - hit the vehicle in which Karcher was riding. As a result, he sustained traumatic bilateral amputations of both of his legs. This is not the first time Karcher has been injured in the line of duty. In 2006, he received the Purple Heart after suffering a gunshot wound while deployed to Iraq.

"Timothy Karcher visited this year's Tour de Cove to see how other Operation Rebound men and women had been helped by CAF," explains Jim Mizes, President and CEO of Club One. "He did not have new prosthetics yet as his legs need time to heal, so on behalf of KrankcycleRx and Matrix we donated a Krankcycle to the Lieutenant Colonel so he could continue to build strength and heal properly. He and his family were overjoyed. It was an unforgettable moment for all of us. His smile will be with me forever."

"The Johnny G Krankcycle by Matrix is fully wheelchair accessible and allows Timothy Karcher, as well as other physically disabled individuals stay fit with a fun, engaging and challenging workout," says Debbie Miller the President and CEO of KrankcycleRx, "We're delighted to be able to give back to this hero who fought for all of us."

Krankcycle is the innovation of Johnny G - the creator of Spinning® and jointly developed with Matrix Fitness, which manufactures, sells and distributes the Johnny G Krankcycle by Matrix. Kranking® is the first exercise program to focus on the upper body as a way to build cardio fitness. It represents a new way to build aerobic capacity and upper body strength, burn calories and build core stability. And since it utilizes the upper body instead of the legs, it provides a unique opportunity for people with physical disabilities to train along with everyone else or independently.

About KrankcycleRx
KrankcycleRx (http://www.krankcyclerx.com) is an authorized distributor of the Johnny G Krankcycle by Matrix dedicated to the sale and use of the Krankcycle in the areas of medical fitness, wellness, and inclusive health. KrankcycleRx promotes inclusive fitness for people of all abilities. No limitations. No one gets left out.

About Club One
Founded in 1991, Club One (http://www.clubone.com) is a leading source for award-winning fitness and wellness solutions throughout the United States. In addition to operating 15 Club One Fitness branded clubs in Northern California and five Frog's Fitness branded clubs in Southern California, Club One also manages more than 60 corporate fitness centers, community centers, multi-tenant business parks and municipalities serving more than 125,000 members nationwide.

Challenged Athletes Foundation
The Challenged Athletes Foundation (CAF) (http://www.challengedathletes.org) is a world leader in helping individuals with physical challenges get involved - and stay involved - in sports. CAF believes that participation in sports at any level increases self-esteem, encourages independence and enhances quality of life. Since 1994, more than $21 million has been raised and almost 4,000 funding requests from challenged athletes in all 50 states and dozens of countries have been satisfied. Additionally, CAF's outreach efforts reach another 60,000 individuals each year.