Modern-day “Renaissance Man” Lance L. Palmgren carves a niche in the publishing arena with the creation of the children’s picture book series, “The Walnut Warriors®” 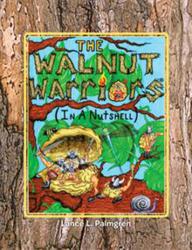 At the turn of the century, Apple Inc. — Fortune magazine’s most admired company in the U.S. and in the world for the last four years — launched the “Think Different” advertising campaign featuring some iconic personalities of the 20th century. These “crazy ones” were geniuses who “stared at an empty canvas and saw a work of art; sat in silence and heard a song that’s never been written; gazed at a red planet and saw a laboratory on wheels.”

In 2000, Lance L. Palmgren casually looked at a simple walnut and saw a character that tickled and provoked his imagination. He builds a story around that character and publishes the first of a seven-book series, titled The Walnut Warriors® (In a Nutshell).

Palmgren’s debut book, The Walnut Warriors® (In a Nutshell) — Book One of a Trilogy — introduces the Walnut Warrior characters. Only someone with Palmgren’s brilliance, creativity, and determination can breathe life into a little inanimate object and create their exciting new world. The Walnut Warriors® are fearsome but lovable nuts. They live in a secret place deep inside The Misty Forest on and inside a huge, extremely old walnut tree. The book describes their lifestyle and home-life, their location, perils, friends, and typical enemies. It also sets the stage for the forthcoming adventures in Books Two and Three of the Trilogy.

Palmgren, over the past years, has not only written and fully color illustrated the entire series of seven children’s books about the adventures of actual Walnut Warriors®, but also designed a floor game and complete line of fully engineered collectible game pieces and toys intended for market in the near future. His other creation, a book titled “The Adventures of Rodney the Raindrop” will be offered as an E-Book. It is his goal to bring his original characters to life via books, toys, games, and film.

Palmgren may not yet be a Pablo Picasso, or a Steve Vai, or a Richard Branson. However, if Apple were to launch a similar ad campaign, this time featuring iconic personalities of the 21st century, his brilliant creativity through The Walnut Warriors® may clinch for him a most desired berth among the ranks of humanity’s iconic geniuses. Once again, he has proven that sometimes, people have to be a little “(wal)nuts” to make a dent in the universe. After all, as Einstein once said, "Imagination is more important than knowledge."

About the Author
Lance Palmgren was a student of the martial arts; an athlete; a highly competitive Motocross racer; and, is a bass guitarist, music composer, lyricist, vocalist and leader of the N.J. heavy metal band, Fist of Faith; an airbrush artist of intricate designs with a penchant toward mechanical design engineering; and, a custom Chopper builder who eventually received a calling from the Lord and became a Minister of the Christian Gospel to outlaw bikers. Lance's talents provided the true-to-life experiences from which The Walnut Warrior tales were drawn. Additionally, as an airbrush artist, a musician, lyricist, and composer, he is currently working on an album with his Christian Rock Band, Throne of Thunder; and, a soon to be released exciting musical video for YouTube, titled “Captain Frost.” Palmgren resides in Branson, Mo. He may be reached via email at: Lance(at)WalnutWarriors(dot)com.