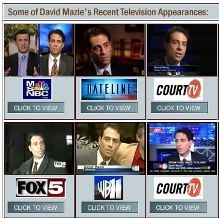 Dr. Dello Russo has promoted himself and his sons as "famous" eye surgeons, spending millions of dollars on radio and print advertising to promote their Lasik practice, and has continually maintained in the media that Lasik is a very simple and safe procedure, even performing Lasik live on Good Morning America. The Dell'Ermo case and its companion lawsuits are further evidence as to the questionable safety of Lasik procedures and the physicians who perform those procedures. In April 2008, the FDA conducted hearings and questioned the safety and effectiveness of Lasik.

*Mazie Slater Katz & Freeman, LLC is aware of a handful of verdicts outside of New Jersey which exceed the amount of this $2.1 million Lasik malpractice settlement, however, it is our understanding that those verdicts were reversed and ultimately settled for significantly lesser sums.