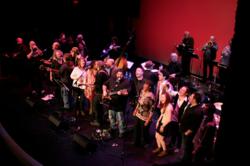 Since 1996, The Rev Tor Band has maintained a powerful presence on the east coast club and festival circuit, performing in venues from Maine to Key West, Florida. In their home-base of New England, they keep a heavy performance schedule, enthusiastically supported by a large following of dedicated fans.

The Last Waltz LIVE is a benefit for Music In Common, Inc., a 501(c)3 non-profit organization whose mission is to strengthen, empower, and educate communities through the universal language of music. Music in Common (MiC) produces free, publicly accessible concerts, school programs, and multimedia productions with an interest in underserved areas and communities where there is a history of conflict, providing a platform for the exchange of ideas and collaborations that can lead to positive social change. Based in Sheffield, MA, MiC has toured more than 100 communities across the US, Middle East, and Far East and operates multiple programs locally, nationally, and internationally.

For more information, images, sponsorship/advertising opportunities, or to arrange for an interview with Last Waltz LIVE please contact Emily Edelman at emily(at)musicincommon(dot)org or 413-591-8234