Christmas Lights Etc. reports surprisingly brisk sales of LED Christmas lights and products for 2009 despite the economic downturn. Converts to LED are flocking in greater numbers to the attributes of LED lights including a significant decrease in energy usage and an 80-90% reduction in power costs. 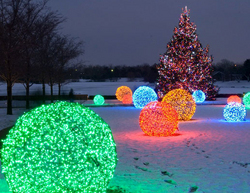 Despite an economic slowdown, consumers are shopping online for energy efficient LED Christmas lights in greater numbers than in years past.

Christmas Lights Etc., one of the largest U.S. suppliers of premium Christmas trees, lights and decorations for homes, commercial decorators and businesses, reports a greater than 200% increase in annual sales of LED Christmas lights and products over 2008.

According to the AP wire (dated December 22, 2008) LEDs, or light-emitting diodes, can be three times more expensive than traditional incandescent lights but use 80-90% percent less energy, produce less heat and last longer. Some calculations project a 1-year payback; others 2 to 3 years. But, regardless of who is doing the math, the same AP article states that the upfront cost of LED lighting is almost always worth the investment -- especially with more utilities throwing in additional incentives that can range from $2 to $4 per set.

A Consumer Reports article (dated November 10, 2009) compared incandescent Christmas lights to LEDs and LED Christmas lights were again the clear choice with an impressive score card. With regard to energy use and costs, the LEDs used 1 to 3 kilowatt hours of energy, compared with 12 to 105 kWh for the incandescents, saving $1 to $11. As for durability, LED bulbs were working even after 4,000-plus hours, while each string of incandescents had one or more bulbs burn out before 2,000 hours. The LED bulbs were also plastic and therefore less likely to break than the glass incandescents. The take-away? LEDs are better for the environment; run much cooler; should last longer; and could save money.

The US government recently swapped out traditional lighting on the National Christmas Tree in Washington, D.C., which now displays 37,000 LED lights. Even New York's Rockefeller Center tree was decorated with 30,000 LED lights on five miles of wire. A recent initiative announced by Governor Paterson and the New York State Energy Research Development Authority (NYSERDA) recommended that residents of the state "Upgrade decorative or holiday lighting with ENERGY STAR qualified Light-Emitting Diode (LED) holiday lighting strands. LED holiday lighting strands last up to 11 holiday seasons, rarely burn out and will save you up to $100 per year on your energy bill!"

"We couldn't be happier with the quality of the tree and performance of the LED lights from Christmas Lights Etc. The LED light bulbs were even brighter than we had anticipated,” said Joe Caracci, Public Works Director, Village of Glen Ellyn in Illinois

For a simple guide to the different types of LED lights and their benefits, read the LED Christmas Lights Guide.