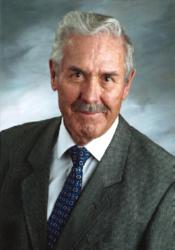 As nuclear scientists and engineers from around the world gather in Chicago, the birthplace of nuclear energy, it is fitting that we present Leonard Koch with this award in honor of his life's work to unlock the energy of the atom to serve humanity.

“The world's first man-made nuclear reactor was the Chicago Pile: Enrico Fermi's innovative arrangement of uranium in graphite blocks," said Loewen. "As nuclear scientists and engineers from around the world gather in the birthplace of nuclear energy for this conference, it is fitting that we present Leonard Koch with this award in honor of his life's work to unlock the energy of the atom to serve humanity. He has been a tremendous mentor for me to understand the positive contributions of EBR-II to society."

Leonard J. Koch— In recognition of his lifetime of pioneering contributions toward the development of an economic and sustainable energy supply system for the peoples of the world as shown by his leadership role in the design and operation of the Experimental Breeder Reactor No. I and No. II (EBR-I and EBR-II) Projects.

The ANS Environmental Sciences Division (ESD) established the W. Bennett Lewis Award to recognize persons who have made major lifetime contributions in nuclear science and engineering toward minimizing environmental footprints, attaining long-term global sustainable energy and development, and having shown great foresight in advancing these goals as recorded in archival publications. The award honors the late Dr. W. Bennett Lewis, a visionary who understood the importance of providing a clean and abundant source of energy to support the world population for generations to come.

Established in 1954, ANS is a professional organization of engineers and scientists devoted to the peaceful applications of nuclear science and technology. Its 11,600 members come from diverse technical backgrounds covering the full range of engineering disciplines as well as the physical and biological sciences. They are advancing the application of these technologies to improve the lives of the world community through national and international enterprise within government, academia, research laboratories and private industry.

Recorded on a wall of the EBR-I building were the historic events of December 20 and 21, 1951.